Gold and silver plummeted again for the second time this week. The price of silver declined in nine out of the past eleven business days. The price of gold fell in four out of the past seven business days. Other commodities prices such as oil and natural gas also tumbled down in last few days. Will gold and silver continue to fall today? On today’s agenda: BOE Rate Decision & Asset Purchase Plan, ECB Rate Decision, U.S. Jobless Claims, Bernanke’s Speech and Spanish 10 Year Bond Auction.

Here is a short outlook for precious metals for Thursday, April 4th:

In the chart below are the normalized rates of gold and silver between March and April (normalized to 100 as of February 28th). The rates of silver and gold plummeted in the past several days. 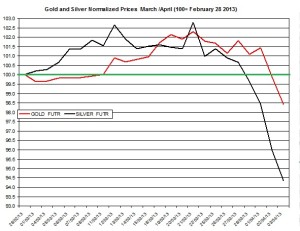 The ratio between the two precious metals slightly increased again on Wednesday to 57.96. During the month, the ratio rose by 2.82% as gold slightly out-performed silver. 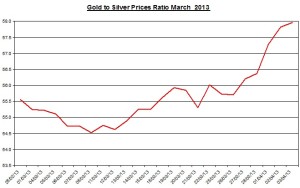 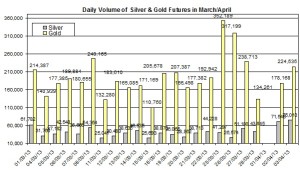 ECB Rate Decision: The recent developments in Cyprus pressured down the Euro even further. These developments aren’t helping to raise the confidence of investors in the Euro. Many think ECB President Mario Draghi will eventually have to lower the interest rate to help rally the slowly contracting EU economy. The question is when this decision will take place. Currently, the expectations are that Draghi will keep the rate unchanged once again;

Bernanke’s Speech: Chairman of the Federal Reserve Ben Bernanke will give a short speech at the 13th Annual Redefining Investment Strategy Education (RISE) Forum. The title of his speech is “Brief Remarks on Financial and Economic Education“. Following the recent FOMC meeting and Bernanke’s testimony from last month, the Chairman of Fed didn’t reveal about the future steps of the FOMC;

U.S. Jobless Claims Weekly Report:  this weekly update will refer to the changes in the initial jobless claims for the week ending on March 29th; in the recent report the jobless claims rose by 16k to reach 343k; this forthcoming weekly report may affect the U.S dollar and consequently commodities and stocks markets;

Spanish 10 Year Bond Auction: the Spanish government will come up with another bond auction; in the previous bond auction, which was held a couple of weeks ago, the average rate reached 4.9% – the lowest rate in recent months;

BOE Rate Decision & Asset Purchase Plan: Bank of England will come out with its decision regarding its basic rate for April 2013 and will announce of any new developments vis-à-vis its asset purchase pogrom; as of March BOE kept the rate unchanged at 0.5% and the asset purchase plan s at £375 billion;

The Euro/ USD changed direction and rose on Wednesday by 0.26% to 1.2854. During the month, the Euro/USD edged up by 0.3%. Moreover, several other currencies such as the Aussie dollar and Canadian dollar moderately appreciated yesterday against the U.S dollar by 0.11% and 0.02%, respectively. The rise in major currencies against the USD didn’t seem to curb the plunge in the prices of bullion. The correlations among gold, Euro, Japanese yen and Aussie dollar remained weak during recent weeks: the linear correlation between gold and USD/Yen reached -0.24 (daily percent changes); the linear correlation between the gold and Euro/USD was -0.23 (daily percent changes). These weak relations suggest the recent decline in precious metals markets had little to do with the daily changes in the foreign exchange markets.

Current Gold and Silver Rates as of April 4th