The prices of gold and silver started off the month of April the same way they have ended March: with an unclear trend. Specifically, the price of gold inched up while silver continued to decline. In the forex market many currencies including Euro and Aussie dollar slightly appreciated against the USD.  Yesterday the U.S and China’s manufacturing PMI reports came out. Both reports showed the manufacturing in both countries continued to grow: U.S PMI declined to 51.3%; China’s PMI bounced back to 50.9%. This means China’s manufacturing sectors are rising at a slightly faster pace, while U.Ss sectors are growing at slightly slower pace than in February. This news might have helped rally gold price. Will gold and silver rally tomorrow? On today’s agenda: Reserve Bank of Australia – Cash Rate Statement, Spain’s unemployment Change, GB Manufacturing PMI, Euro Area unemployment rate, U.S Factory Orders and Australian Trade Balance.

Here is a short outlook for precious metals for Tuesday, April 2nd:

In the chart below are the normalized rates of gold and silver between March and April (normalized to 100 as of February 28th). The price of silver slightly declined in the past couple of weeks. 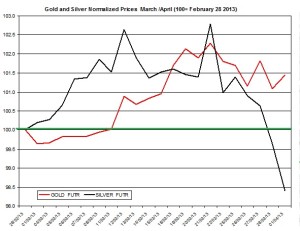 The ratio between the two precious metals increased on Monday to 57.27. During last month, the ratio rose by 1.45% as gold slightly out-performed silver.

Due the different directions gold and silver took in recent weeks, the linear correlation of the two precious metal daily percent changes declined to its lowest level in over two years, as indicated in the chart herein. During March the linear correlation of their daily percent changes 0.603, which means the two metals’ relation has weaken in recent weeks. 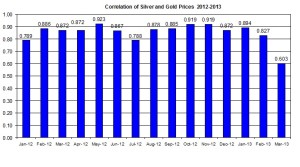 Reserve Bank of Australia –Rate Decision: in the past two months, the overnight money market rate of Australia’s Reserve Bank remained unchanged 3%, which is still the lowest level since the September 2009. RBA reduced the rate four times last year by a total of 1.25pp. If the RBA will decide to cut its rate again, this news may affect the Aussie dollar;

GB Manufacturing PMI: In the recent report regarding January the index slipped to 47.9. This rate means the manufacturing sector is contracting at a slow pace; this index might affect GB Pound;

Euro Area unemployment rate: the rate of unemployment of the Euro Area edged up by 0.2 pp to 11.9%, according to last month’s report. This mean there the unemployment isn’t improving. If in the upcoming report this trend will continue, it may adversely affect the Euro;

Spain‘s unemployment Change: the number of people unemployed in Spain increased again in February by 59.4k. This mean, the employment situation in Spain has deteriorated in recent month;

Australian Trade Balance: In the previous update, regarding January, the seasonally adjusted balance of goods and services expanded its deficit to $1,057 million. The export of non-monetary gold rose by $211 million; if the gold exports will continue to rise in February, it might suggest a gain in demand for non-monetary gold (see here recent report);

The Euro/ USD rose again on Monday by 0.39% to 1.2866. During last month, the Euro/USD decreased by 1.93%. Conversely, several other currencies such as the Aussie dollar appreciated during last month against the U.S dollar by 1.9%. The Japanese yen appreciated against the USD yesterday by 1.06%. The mixed trend in major currencies against the USD may have contributed to the unclear trend in precious metals markets. The correlations among gold, Euro, Japanese yen and Aussie dollar remained weak during recent weeks: the linear correlation between gold and USD/Yen reached -0.30 (daily percent changes); the linear correlation between the gold and Euro/USD was -0.26 (daily percent changes). These weak correlations imply the recent developments in precious metals markets had little to do with the daily movements in the foreign exchange markets.

Current Gold and Silver Rates as of April 2nd