The rates of silver and gold remained virtually unchanged on the first of day of the week. In Australia, RBA left its policy unchanged and didn’t cut its cash rate. Governor Stevens was upbeat about the rise in capital expenditures. This news and positive sentiment may help rally the Aussie dollar, which tends to be correlated with bullion rates. Nonetheless, RBA might eventually decide to cut its cash rate in the near future. The next rate decision will be of Bank of Canada that will be announced tomorrow. In Asia, CME Asia is expanding its business mainly on the rise in commodities including gold and currencies. As the Asian financial markets continue to grow the effect of Asia on the direction of commodities will continue to rise. Will gold and silver bounce back today? Currently, gold and silver are rising. On today’s agenda: BOC rate decision, ECONFIN Meeting, U.S. ISM Non-Manufacturing PMI, Australian GDP Fourth Quarter 2012, and GB Services PMI.

Here is a short outlook for precious metals for Tuesday, March 5th: 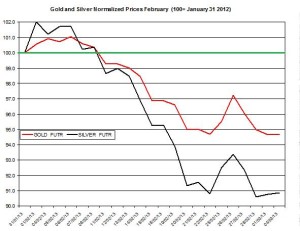 The ratio between the two precious metals fell on Monday to 55.22. During March, the ratio edged down by 0.61% as gold slightly under-performed silver. 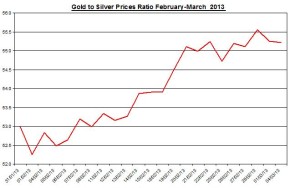 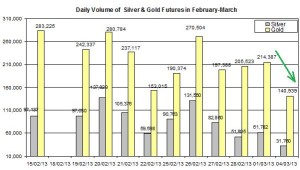 The Euro/ USD inched up on Monday by 0.03% to 1.3026. During the month, the Euro/USD fell by 0.32%. The Japanese yen also edged up by 0.1% against the USD. Conversely, some currencies such as the Aussie dollar depreciated yesterday against the USD by 0.06%. This low volatility along with mixed trend may have partly contributed to the little movement and mixed trend in the bullion market. The correlations among gold, Japanese yen and Canadian dollar have weakened in recent weeks: during February/March, the linear correlation between gold and USD/CAD declined to -0.14 (daily percent changes); the linear correlation between the gold and USD/Yen declined to -0.29 (daily percent changes). These mid-weak correlations might imply the recent movement in gold and silver rates had less to do with the daily shifts in the foreign exchange markets. Nonetheless, if major currencies will strengthen against the USD, they might positively affect gold and silver.

Current Gold and Silver Rates as of March 5th

ECONFIN Meetings: EU ministers of finance and EU leading policymakers will convene for the monthly meeting;

Australian GDP Fourth Quarter 2012: In Q3 2012, the GDP expanded by 0.5% (seasonally adjusted) – a slightly lower growth rate than in the first couple of quarters. The slowdown in China’s economy might have also adversely affected the growth of Australia’s GDP. Australia is among the leading countries in exporting commodities; if the GDP growth rate will fall again, it could affect the direction of Australia dollar;