The prices of gold and silver resumed their moderate movement as both precious metals remained nearly unchanged yesterday. The recent update related to Cyprus is that its parliament rejected the despite levy; this rejections blows the EU bailout plan. The developments in Cyprus are likely to keep affecting not only the forex markets but also commodities. This news item might take the back  seat today as the main event of the week will be the FOMC meeting that will conclude today with a press conference. If the FOMC will update its economic outlook or change or even hint of any changes in the near future to its monetary policy, then the prices volatility of precious metals are likely to rise.  On today’s agenda besides the FOMC meeting include: Great Britain Claimant Count Change, China flash Manufacturing PMI, Japanese Trade balance, Minutes of MPC Meeting, U.S. Housing Starts & Building Permits, GB Annual Budget.

Here is a short outlook for precious metals for Wednesday, March 20th:

In the chart below are the normalized prices of gold and silver between February and March (normalized to 100 as of February 18th). The price of gold slightly rose in recent days. 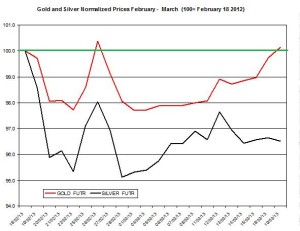 The ratio between the two precious metals increased on Tuesday to 55.93. During the month the ratio edged up by 0.66% as gold slightly out-performed silver.

The slow movement of both bullion rates is represented in the fall in precious metals prices’ volatility during the month: the standard deviations of gold and silver (daily percent changes) reached 0.35% and 0.51%, respectively. 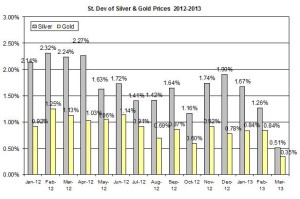 The FOMC will conclude today its second meeting for this year and will announce of any updates to its monetary policy or its economic outlook of the U.S economy. In the previous FOMC meeting, which was held back at the end of January, the Fed didn’t announce of any changes.  The table below shows the precious metals market reaction to the news of the FOMC meetings in 2012 and 2013.

Based on the above, if the FOMC won’t change its policy then we might see a similar market reaction to the news of the FOMC meeting. Moreover, Bernanke remained dovish in his recent testimony as do the majority of the FOMC members.

Several members, who represent a minority in the board, remain hawkish and want to put a time frame on the current asset purchase program. Keep in mind that if in the upcoming meeting, the balance of power will shift towards the hawkish standpoint; then this could pull down gold and silver prices. This scenario, however, is less likely. The Fed will also update its economic outlook.

Considering the progress in the housing and jobs markets, it might be more positive on the future of the U.S economy. The likely scenario is that the Fed will keep its policy unchanged.

Great Britain Claimant Count Developments: This report will show the changes in the number of unemployed in GB; as of the previous month’s report this figure had declined by 12.5k; the rate of unemployment edged up to 7.8% in the recent report;

Minutes of MPC Meeting: in the recent MPC meeting, the Bank left the rate flat at 0.5% and the asset purchase program at £375 billion; the MPC still has concerns regarding GB’s inflation. The minutes of last week’s meeting might offer some insight behind this decision;

U.S. Housing Starts and Building Permits: this report was historically correlated with gold – as housing starts declined, gold prices tended to increase the next day (even when controlling to the U.S dollar effect); in the recent monthly report, the adjusted annual rate reached 890,000 in January 2013, which was 8.5% drop December’s rate. On the other hand, building permits rose during January by 1.8% (M-o-M). If the housing market will resume its rally, this trend could pull down the prices of precious metals;

German 10 Year Bond Auction: the German government will issue its monthly with bond auction; in the recent bond auction, which was held at the last week of February, the average rate reached 1.66% – the highest rate in recent months;

Japanese Trade balance: The Japanese trade balance deficit for January 2013 declined by 13.4% compared to December, and reach 678 billion YEN (roughly $7.1 billion) deficit (seasonally adjusted figures). This decline is due to the higher growth in exports (by 3.6%) than in imports (by 1.4%);