The prices of precious metals slightly rose again for the second straight day. The volatility might pick up as the week will progress as the main events and reports of the week will come into fruition by then. The main events include the ECB rate decision and U.S non-farm payroll report. Will gold and silver continue to rally today? Currently, gold is slipping. In the U.S non-manufacturing PMI rose again to 56 in February. This means the non-manufacturing sectors are rising at a faster pace than in January. On today’s agenda: Governor King speaks, ADP estimate of U.S. non-farm payroll, Bank of Canada’s Overnight Rate, U.S Factory Orders, Australian Trade Balance and Bank of Japan Monetary Policy Statement.

Here is a short outlook for precious metals for Wednesday, March 6th: 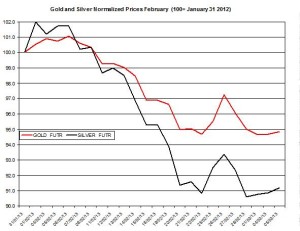 The ratio between the two precious metals slipped again on Tuesday to 55.11. During March, the ratio declined by 0.82% as gold slightly under-performed silver. 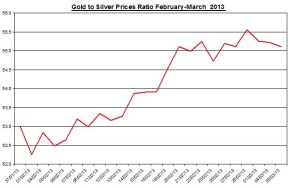 The Euro/ USD rose again on Tuesday by 0.2% to 1.30552. During the month, the Euro/USD fell by 0.12%. The Japanese yen also increased by 0.2% against the USD. Conversely, The Aussie dollar also appreciated yesterday against the USD by 0.61%. This low volatility in the forex market and modest gains was also the case for the precious metals prices. The correlations among gold, Japanese yen and Aussie dollar remained weak in recent weeks: during February/March, the linear correlation between gold and AUD/USD declined to 0.16 (daily percent changes); the linear correlation between the gold and USD/Yen declined to -0.32 (daily percent changes). These mid-weak correlations might imply the recent changes in gold and silver rates had less to do with the daily changes in the foreign exchange markets. Nonetheless, if major currencies will further strengthen against the USD, they might pull up gold and silver. The table below shows the correlations between precious metals and major currencies pairs. 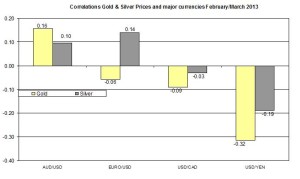 Current Gold and Silver Rates as of March 6th

Bank of Canada’s Overnight Rate: The Bank of Canada will announce its decision on the Canadian overnight rate, which remained unchanged in the past two and half years at 1%. The last time the BOC reduced the rate was back in September 2010. The current expectations are that the BOC will keep the rate unchanged. This news may affect the direction of the Canadian dollar;

Bank of Japan – Monetary Policy Meeting: The news of the nomination of BOJ governor may have contributed to the movement of the Yen. In the recent meeting, BOJ left the interest rate flat at 0 to 0.1 percent and didn’t change its asset purchase plan. If BOJ will further expand its monetary policy, this could weaken the Japanese yen;

Governor King speaks: Bank of England’s Governor will testify about banking standards of England before Parliamentary Committee; he may also offer some insight regarding the upcoming MPC monetary policy meeting; this speech may influence British Pound traders;

Australian Trade Balance: The report will pertain to January 2013. In the recent update, regarding December, the seasonally adjusted balance of goods and services contracted its deficit to $427 million. The export of non-monetary gold fell by $274 million; if the gold exports will continue to decline in January, it might suggest a drop in demand for non-monetary gold (see here last report);