The prices of gold and silver slightly declined again for the second consecutive day.  The low volatility was in other markets including oil, stocks and forex. The recent Euro Summits were concluded with no big headlines regarding Greece’s debt crisis. Currently, the prices of gold and silver are rising.  On today’s agenda: Minutes of October’s FOMC Meeting, Claimant Count Change, U.S Producer Price Index, Governor King speaks, U.S. Retail Sales Report and Euro Area Industrial Production.

Here is a short outlook for precious metals for Wednesday, November 14th:

As seen below, the chart presents the developments in the normalized prices of bullion during November (normalized to 100 as of October 31st). During recent days, both gold and silver bounced back after they had declined during the beginning of the month. 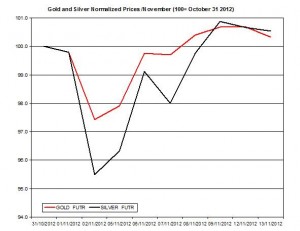 The ratio between the two precious metals edged down on Tuesday to 53.09. During November the ratio slipped by 0.21% as gold slightly under-performed silver. 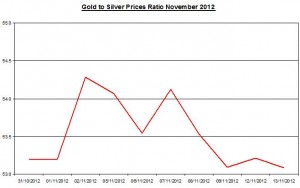 Minutes of FOMC Meeting: Following the October FOMC meeting, in which the Fed left its policy unchanged, the prices of bullion didn’t move much didn’t have a strong reaction to this news – gold and silver prices slightly declined on the day of the announcement. The minutes of the recent FOMC meeting might add some additional insight behind this non-decision and more important the potential future steps of the FOMC especially after the U.S Presidential elections, the upcoming decision to be made regarding the U.S fiscal cliff and the upcoming FOMC meeting at the middle of December;

U.S. PPI: This report will present the developments in the PPI during October 2012, i.e. the inflation rate from the producers’ stand point. In the latest report regarding September this index for finished goods hiked again by 1.1% compared with August’s rate and by 2.1% in the last 12 months; this news might affect commodities prices;

Claimant Count Change: This report will present the developments in the number of unemployed in GB; as of last month’s report this figure had fell by 4k;

Governor King speaks: The governor of Bank of England will give a speech about the recent inflation report; he might also offer some refer to the recent MPC interest rate decision and monetary policy; this speech may influence British Pound traders;

U.S. Retail Sales Report: in the recent report for September, the retail sales increased by 1.1% from the previous month;

The Euro/ USD declined on Tuesday at 1.2704. During November, the Euro/USD decreased by 1.98%. Conversely, some currencies such as Aussie dollar appreciated yesterday against the USD by 0.39%. This mixed trend might have contributed to different directions gold and silver took yesterday. As seen in the chart below, the correlation among gold silver, Euro and Aussie remains mid-strong and robust: during October and November, the linear correlation between gold and Euro /USD reached 0.53 (daily percent changes); the linear correlation between the silver and Aussie /USD was 0.45 (daily percent changes). Thus, if the Euro and other risk currencies will decline today against the USD, they are likely to pull down gold and silver.

Current Gold and Silver Rates as of November 14th

Precious metals resumed their downward trend in recent days and might continue on this slow descent in the days to follow. The little headway in the recent EU summits didn’t help move the Euro up and consequentially might have also contributed to the decline of gold and silver. The upcoming U.S reports including U.S PPI, and retail sales might affect the USD and commodities prices as specified above. . The upcoming publication of the minutes of the FOMC meeting might positively affect bullion prices if the minutes will hint of near future actions the Fed plans to take in order to jumpstart the economy. The continuous slow trading in the forex market was also reflected in the low volatility in the precious metals market. Thus if the Euro and other “risk currencies” will continue to depreciate against the USD, then they are likely to drag down precious metals.