Gold and silver prices continued their downward trend yesterday and thus they have declined for the third consecutive day. Mario Draghi, ECB President, contributed to the bearish market sentiment as he, much like the IMF, warned the economic outlook for the Euro-zone is grim.  Will this downward trend of precious metals and Euro continue? Currently, the prices of gold and silver are declining. On today’s agenda: European Council Meeting, China New Loans, U.S 10 Year Bond Auction, Minutes of BOJ meeting, Australia Employment Report,  and SNB Chairman Jordan Speaks.

Here is a short outlook for precious metals for Wednesday, October 10th:

As seen below, the chart shows the changes of normalized prices of precious metals during September-October (normalized to 100 as of September 13th). During recent days, gold and silver were traded down. 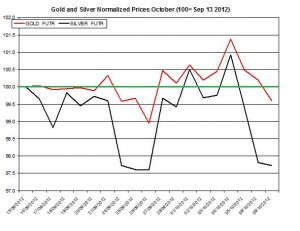 The ratio between the two precious metals slipped on Tuesday to 51.93. During October, the ratio increased by 1.23% as silver slightly under-performed gold. 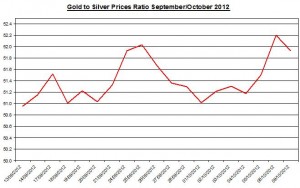 SNB Chairman Jordan Speaks: Swiss National Bank President will give a speech. This speech might affect the Swiss franc currency;

China New Loans: This report will report the recent changes in China’s new loans given during the recent month. According to the last report, the total loans rose as the People Bank of China BOC had cut the interest rate and eased the restrictions on commercial banks regarding new loans; this report is another indicator for the economic progress of China;

U.S 10 Year Bond Auction: the U.S government will issue another bond auction; in the recent bond auction, which was held at the second week of September, the average rate reached 1.76%;

Minutes of BOJ meeting: BOJ will publish the minutes of last week’s meeting. The minutes may offer some insight behind the Bank’s recent decision to keep its monetary policy unchanged that could affect the Japanese yen and consequently commodities prices;

Australia Employment Report: in August the rate of unemployment edged down to 5.1%; the number of employed (seasonally adjusted) slightly fell by 8,800 people; the number of unemployed decreased by 10,600 during August compared with July‘s numbers. This report could affect the Australian dollar;

The Euro/ USD also declined again on Tuesday by 0.64% to 1.2885. During the month, the Euro/USD rose by 0.2%. On the other hand, several currencies including Aussie dollar appreciated yesterday against the USD by 0.16%. The correlation between gold and Euro remains mid-strong and positive: during September-October, the linear correlation between the gold and EURO/USD reached 0.61 (daily percent changes); the linear correlation between the gold and USD/Canadian dollar was -0.51 (daily percent changes). Following yesterday’s mixed trend in the foreign exchange markets in which the Euro depreciated while the Aussie dollar and Canadian dollar appreciated against the USD, this could contributed to the little movement of precious metals prices. The chart bellows shows the linear correlations among silver, gold and the main exchange rates. If the Euro and other risk currencies will further fall, they are likely to also pull down gold and silver. Currently, the Euro/USD is trading down. 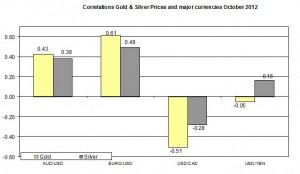 Current Gold and Silver Rates as of October 10th

The prices of precious metals continued their downward trend and fell for the third consecutive business days. Their decline coincided with the recent fall of the Euro/USD. The ongoing bearish market sentiment towards the Euro might continue, which, in turn, is likely to also pull down precious metals prices. Today’s European council meeting might further pull down the Euro, if the members of the Council won’t come up with positive news regarding the future growth of Europe. The uncertainty around the bailout of Spain and Greece’s debt crisis is likely to adversely affect the Euro and other “risk currencies”. Finally, today’s publication of China new loans might adversely affect the commodities prices if the report will show little growth.