Gold and silver prices rose again on Friday, but will this rally continue this week? The main publications will be released later this week including the U.S GDP, manufacturing PMI and non-farm payroll reports. Currently precious metals prices are increasing. On today’s agenda: Japan’s Household Spending.

Here is a short outlook for gold and silver for Monday, May 28th:

The chart below presents the normalized rates of metals during month up to date (normalized to 100 as of April 30th). 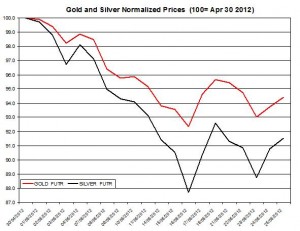 The ratio between the two metals slipped on Friday to 55.35. During the month the ratio rose by 3.16% as silver has moderately under-performed gold during the month. 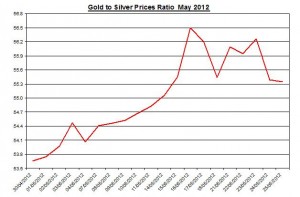 The U.S. 10-year Treasury yield remained nearly unchanged and reached 1.75% on Friday. During May the 10 year treasury yield declined by 0.20 percent point. This decline in LT securities yields may indicate that the demand for “secure investments” continue to rise. During May there was a low and positive correlation between U.S. long term Treasury yield and gold price. Nevertheless the trend of both rates is downward. The chart below suggests that if the LT U.S. treasury yield will continue to fall, it might indicate that gold will also decline. 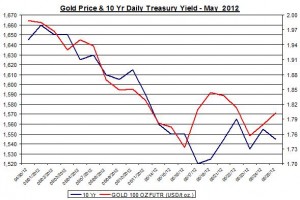 Japan Household Spending: According to the previous report, the Japanese housing spending rose by 3.4%; this report could affect the direction of the Yen currency;

The Euro/U.S Dollar continued to trade down on Friday by 0.13% to 1.2517 – the lowest rate in nearly two years. During the month (UTD) the Euro/U.S Dollar plummeted by 5.45%. Furthermore, “risk currencies” such as the Australian dollar also depreciated during Friday against the USD. If the U.S dollar will continue to rise against the Euro, bullion might also continue to trade down. Currently the Euro is increasing against the USD.

Current Gold and Silver Prices as of May 28th

Daily Outlook for May 28th

Bullion rose again during Friday and thus completed a two day rally. Since there won’t be too many news items and publications on the agenda and the U.S markets are closed (Memorial day), the bullion prices will likely to moderately change and perhaps continue their rally from the end of last week.

← Coffee Prices –Outlook and Analysis for May June 2012
U.S. Consumer Confidence Declined Again in May 2012 →