Gold and silver edged down again for the second consecutive day. The recent testimony of Bernanke didn’t offer any hints of the future steps of the FOMC. Bernanke voiced his concerns for the slow decline in rate of unemployment and slow progress in the housing market. He remained vague as to the actions the FOMC would consider to jump-start the U.S economy. Germany will vote tomorrow on recapitalization of Spanish banks of nearly €100 billion. The inflation report came out yesterday: the core CPI edged up again by 0.2% during June. If this vote will pass it may ease some of the uncertainty around the Spanish banks debt crisis. Currently gold and silver are falling. On today’s agenda: Minutes of MPC Meeting, U.S. Housing Starts & building permits, Bank of Canada’s Monetary Policy, and Bernanke’s Testimony in the House of Representatives.

Here is a short outlook for precious metals for Wednesday, July 18th:

The chart bellow presents the normalized rates of these precious metals during the month (normalized to 100 as of June 29th). 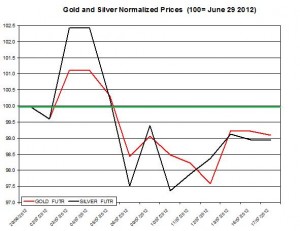 The ratio between the two precious metals edged down on Tuesday to 58.19. During July the ratio rose by 0.16% as gold slightly out-performed silver. 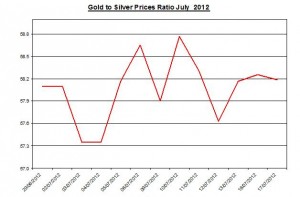 MPC Meeting Minutes: in the recent MPC meeting it was announced the rate will remain unchanged at 0.5% but the asset purchase program increased by £50 to £375 billion. The minutes of the recent meeting might offer some insight behind this decision;

U.S. Housing Starts: this report was historically negatively linked with gold price – as housing starts decreased, gold prices tended to rise the following day (even when controlling to the U.S dollar effect); in the previous report, the adjusted annual rate reached 708,000 in May 2012, which was 4.8% below April’s  rate;

Bernanke’s Testimony: This will be a testimony of the same title as a day earlier, before Committee on Financial Services in the U.S. House of Representatives;

The Euro/US Dollar rose again on Tuesday by 0.19% to 1.2294. During the month (UTD) the Euro/USD declined by 2.94%. Further, other exchange rates such as the Australian dollar also appreciated on Tuesday against the USD by 0.65%. Despite the different directions these currencies and bullion have taken there are still strong relations among them. The linear correlation between gold and Euro/USD is 0.70 (daily percent changes, for the last few weeks).  If the Euro/USD and AUD/USD will change direction and fall, they may also adversely affect precious metals rates. Currently, the Euro/USD is falling.

Current Gold and Silver Rates as of July 18th

Gold and silver continued to dwindle for the second consecutive day and this trend may continue today. As expected, Bernanke didn’t offer any hints of the Fed’s plans to stimulate the U.S economy. The U.S housing reports will come out today and may affect U.S stocks, forex and commodities markets. BOC monetary policy report might affect the Canadian dollar which tends to be strongly linked with bullion rates. Finally, if the major exchange rates including Euro, Aussie dollar and Canadian dollar will change direction and depreciate against the USD, this could adversely affect bullion rates.