The prices gold and silver rose again for the second consecutive day. The rally was plausibly fueled by the recent appreciation of the Euro against the USD. The ECB left its interest rate unchanged at 0.75%. Mario Draghi stated (again) that ECB is ready to start its bond purchase program that will help Spain. This news may have contributed to the recent recovery of the Euro. U.S jobless claims rose by 4k to reach 367k. Currently, the prices of gold and silver are falling. On today’s agenda include: U.S. Non-Farm Payroll ((Update: 114k jobs added in September) and Canada’s Employment Report.

Here is a short outlook for precious metals for Friday, October 5th: 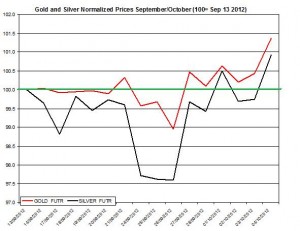 The ratio between the two precious metals slipped on Thursday to 51.18. During October, the ratio nearly didn’t change as gold performed much like silver. 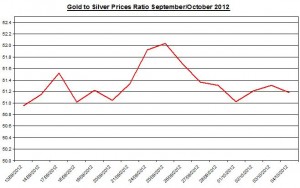 The minutes of the FOMC meeting, which was held back in September 13-14 came out yesterday. The report showed the FOMC is considering continuing with its current monetary expansion plan even if the U.S economy will recover:

“To support continued progress toward maximum employment and price stability, the Committee expects that a highly accommodative stance of monetary policy will remain appropriate for a considerable time after the economic recovery strengthens.”

U.S. Non-Farm Payroll Report: in the recent report for August 2012, the labor market expanded by a lower than expected rate: the number of non-farm payroll employment rose by 96k; the U.S unemployment rate slipped to 8.1%; this report may affect not only the U.S dollar, but also commodities prices (see here my last review on the U.S employment report). The table below shows the relation among the prices of gold, silver and USD/YEN with the labor report. In the last report the prices of silver and gold hiked. My guess is that if the upcoming report will be positive and rise above the 120k mark, it is likely to pull up precious metals rates. 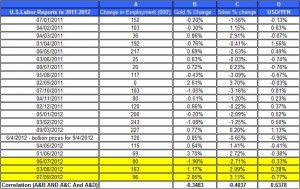 Canada’s Employment Report: In the recent employment report for August 2012, unemployment remained at 7.3%; the employment rose by 34k during the month. The upcoming report might affect the Canadian dollar and consequently the prices of bullion;

The Euro/ USD hiked on Thursday by 0.87% to 1.3017. During the month, the Euro/USD rose by 1.23%. Further, other currencies including Aussie dollar and Canadian dollar also appreciated yesterday against the USD by 0.24% and 0.73%, respectively. The correlation between gold and Euro and other “risk currencies” remains mid-strong and positive: during September/October, the linear correlation between the gold and EURO/USD was 0.66 (daily percent changes). If these currencies and the Euro will continue to rise against the USD, then they are likely to pull up gold and silver. Currently, the Euro/USD is trading up.

Current Gold and Silver Rates as of October 5th

The prices of precious metals rose on the second consecutive day. The recent minute of the FOMC meeting may have contributed to the rally of precious metals. The rise in the Euro and other “risk currencies” may have also helped pull up precious metals. The ongoing speculation around Spain’s next move could affect not only the Euro, but also bullion rates.  Today’s publication of the U.S. jobs report could positively affect the USD, stocks and commodities if the report will show growth in jobs of above 120k. Finally, if the Euro and Canadian dollar will rise, then they could also rally precious metals.

← Gold and Oil Bounced Back on Thursday– Recap October 4th
U.S Employment Up by 114k Jobs in September | Gold and Silver Are Falling →