The prices of gold and silver remained virtually unchanged yesterday. In the U.S the debate over raising the debt ceiling continues and is likely to affect the financial markets in the weeks to follow. The U.S CPI remained unchanged during December, according to the recent CPI report. The core CPI edged up by 0.1% to a 1.9% growth in the past twelve months. In EU the annual inflation also remained unchanged at 2.2%. In the U.S, the net foreign acquisitions of long and short securities reached a net TIC inflow of $27.8 billion during November. This news suggests the demand for U.S securities remains robust. Will gold and silver resume their downward trend? Currently, the prices of gold and silver are declining. On today’s agenda: French 10 Year Bond Auction, ECB Monthly Bulletin, Spanish 10 Year Bond Auction, U.S. Jobless Claims, U.S. Housing Starts & Building permits, Philly Fed Manufacturing Index, and China Fourth Quarter GDP 2012.

Here is a short outlook for precious metals for Thursday, January 17th:

As seen below, the chart presents the changes in the normalized prices of precious metals during the month (normalized to 100 as of December 30th). During recent weeks silver and gold had an unclear trend. 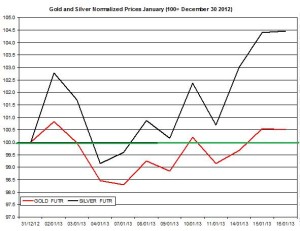 The ratio between the two precious metals declined again on Wednesday to 53.46. During the month the ratio fell by 3.7% as gold under-performed silver. 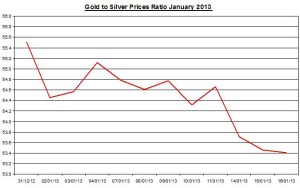 French 10 Year Bond Auction: the French government will come up with its monthly bond auction; in the previous bond auction, which was held during by the beginning of January, the average rate reached 2.07%;

ECB Monthly Bulletin: This monthly update for December analyzes the economic changes of the Euro Area including price stability, interest rate decisions and governments’ debt; this report might provide some insight into the updated expectations of the EU growth;

Spanish 10 Year Bond Auction: the Spanish government will have another monthly bond auction; in the previous bond auction, which was held during the first week of December, the average rate reached 5.29% – a slightly lower rate than in the recent auction; if the rate will continue to fall, it could suggest the EU is regaining the trust of investors;

U.S. Jobless Claims Weekly Report:  this report will pertain to the weekly shifts in the initial jobless claims for the week ending on January 11th; in the previous report the jobless claims rose by 4k to reach 371k; this upcoming weekly report may affect the U.S dollar and consequently commodities;

U.S. Housing Starts: the U.S Census Bureau will publish its U.S housing starts update for December 2012; this report was historically linked with gold price – as housing starts decline, gold prices tended to rise the following day (even when controlling to the U.S dollar effect); in the previous monthly report, the adjusted annual rate reached 861,000 in November 2012, which was 3% below October’s rate;

Philly Fed Manufacturing Index: This monthly survey shows an estimate for the progress of the US manufacturing conditions. In the latest December survey, the growth rate rose from -10.7 in November to +8.1 in December. If the index will continue to rise it may positively affect precious metals (the previous Philly Fed review);

The Euro/ USD declined again on Wednesday by 0.14% to 1.3287. During the month, the Euro/USD increased by 0.7%. Alternatively, some currencies such as Aussie dollar appreciated yesterday against the USD by 0.08%. This mixed trend of “risk currencies” may have contributed to the low volatility of precious metals. Furthermore, the correlations among gold, Euro remained weaker than in the past: during the month, the linear correlation between gold and USD/CAD reached -0.34 (daily percent changes); the linear correlation between the gold and AUD /USD reached 0.36 (daily percent changes). Nonetheless, if the Euro and other “risk currencies” will depreciate against the USD, they are might adversely affect bullion rates.

Current Gold and Silver Rates as of January 17th

Prices of precious metals remained virtually unchanged yesterday after they had increased in the first two days of the week. The rally of precious metals might change direction and both gold and silver might resume their slow paced downward trend in the last two days of the week. The recent news of the no growth in the U.S CPI and EU inflation might contribute to the decline of precious metals during the week. The upcoming U.S reports including: Jobless Claims, Housing Starts & Building permits and Philly Fed Manufacturing Index could affect not only the USD but also precious metals. If these reports will show the U.S economy is developing, they might pull down precious metals prices. On the other hand, the upcoming report regarding China’s Fourth Quarter GDP might help rally commodities prices if the GDP will rise by a higher rate than in the previous quarter and than the current expectations. Finally, if the Euro and other “risk currencies” will decline against the USD, they might adversely affect gold and silver.