The prices of precious metals resume their downward trend as both gold and silver sharply fell. The recent tumble in precious metals, however, didn’t coincide with the recent depreciation of the USD. The talks between President Obama and House Speaker Boehner in tackling the fiscal cliff continue to pose uncertainty in the financial markets. Will precious metals continue to fall today? Currently the prices of gold and silver are slightly increasing. On today’s agenda: German Business Climate Survey, Minutes of MPC Meeting, U.S. Housing Starts and Building Permits, and Bank of Japan Monetary Policy Statement.

Here is a short outlook for precious metals for Wednesday, December 19th:

As seen below, the chart shows the developments in the normalized prices of precious metals during the month (normalized to 100 as of November 30th). During recent weeks, the price of silver and gold had a downward trend. 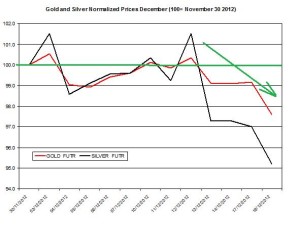 The ratio between the two precious metals slightly rose on Tuesday to 52.83. During December, the ratio rose by 2.52% as gold slightly out-performed silver.

German Business Climate Survey: In the November report, the business climate index increased to 101.4 for November; if this trend will continue, it might pull up the Euro;

Minutes of MPC Meeting: in the previous MPC meeting, the Bank left the rate unchanged at 0.5% and the asset purchase program at £375 billion; the MPC still has concerns regarding GB’s inflation. The minutes of the recent meeting might offer some insight behind this decision;

U.S. Housing Starts: this report was historically correlated with gold– as housing starts rise, gold prices tended to decline the next day (even when controlling to the U.S dollar effect); in the previous monthly report, the adjusted annual rate rose by 3.6% to reach 894,000 in October;

U.S. Building Permits: building permits declined during October by 2.7% (M-o-M) to 866,000. If this report will continue to fall in the building permits rate, it may indicate that the U.S housing market (from this aspect) is pulling down (the recent U.S building permits update);

Bank of Japan –Monetary Policy Statement: Bank of Japan will announce its interest rate and monetary policy for January. In the previous meeting, BOJ kept the interest rate unchanged at 0 to 0.1 percent, and hasn’t expanded its stimulus plan. If the BOJ will introduce a new monetary stimulus plan it could affect the Yen, other currencies and commodities;

The Euro/ USD rose on Tuesday by 0.49% to 1.3229. During December, the Euro/USD increased by 1.9%. Conversely, several currencies such as Aussie dollar depreciated again yesterday against the USD by 0.16%. The correlations among gold, Euro and Aussie dollar have weakened in recent weeks: during the past several weeks, the linear correlation between gold and Euro /USD declined to 0.08 (daily percent changes); the linear correlation between the gold and AUD /USD was 0.16 (daily percent changes). This weak correlation might suggest the recent fall in precious metals didn’t coincide with the movement of major currencies. Nonetheless, if the Euro and other risk currencies will continue to rise against the USD, they are likely to curb the downward trend of bullion rates.

Current Gold and Silver Rates as of December 19th

The prices of gold and silver resumed its downward trend and sharply fell yesterday. This fall, however, doesn’t seem to be related to the movement in the currencies markets as the USD depreciated against major currencies. As the year is winding down, the trade volume tends to fall which could result in sudden sharp rises in market volatility. According to the CME, total market volume for gold was around 19.7 thousand contracts; in comparison, last week on Tuesday, total market volume for gold was around 41.4 thousand contracts. If the volume will continue to dwindle, it could raise the odds of sudden sharp changes in certain days of gold and silver prices.

The talks in Congress to resolve the fiscal cliff are likely to continue affecting not only the shifts in the USD but also precious metals. The recent update on this front is that Boehner showed a plan to Obama in which the government will raise taxes on households earning over $1 million per year. This news doesn’t seem to impress the Democrats. The upcoming reports including: German Business Climate, Minutes of MPC Meeting and U.S. Housing Starts & Building Permits could affect the Euro, British pound and USD, respectively. These currencies, in turn, may affect the movement of bullion as indicated above.  Finally, if the Euro and other “risk currencies” will rise again against the USD, they are likely to curb the fall of precious metals.