Precious metals prices didn’t do much during the first couple of weeks of August but then they both rallied as the renewed expectations of another stimulus plan by the Fed reignited the bullion market. The rise of Euro/USD coincided with the recovery of precious metals prices. Will this upward trend continue during September? The main events of the month will continue to be around the future steps of the FOMC regarding its stimulus plan (i.e. a third quantitative easing plan) and the EU debt crisis. The FOMC will convene during the second week of September. The ECB will announce its interest rates and might consider a bond purchase program to help struggling countries such as Spain and Italy in raising debt.

Let’s analyze the precious metals market for August and provide a short outlook for gold and silver prices for September 2012.

Gold and silver rates hadn’t done much during the first half of the month but then they started to pick up as they both rallied during the second half of the month.  Most of the growth came in three separate days: on August 21st, following the speculations that the ECB will commence its bond purchase program; on August 23rd  following the publication of the minutes of the recent FOMC meeting; on August 31st, following Bernanke’s speech at Jackson Hole.

During the month, gold rose by 4.52%; silver, even more than gold, hiked by 12.64%. This was the best performing month for both precious metals since January 2012.

Let’s divide August into two parts: the table below divides the month at August 13th; I divide the month in order to emphasize the sharp change in the direction of both gold and silver rate; during the first part of August, gold edged down by 0.1% and silver price by 0.2%. During the second part of August, silver hiked by 12.9% and gold price by 4.7%.

The chart below presents the changes of gold and silver prices during August, in which the prices are normalized to 100 on July 31st 2012. 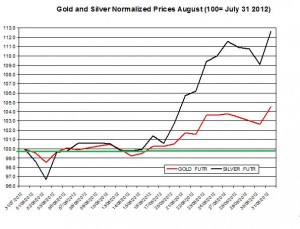 The next chart shows the shifts in the ratio of gold to silver (gold price/silver price) during August; the ratio had a downward trend mainly during the second part of the month. The ratio rose as silver price has out-performed gold price. In the last week of August the ratio ranged between 53 and 54. 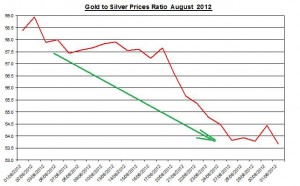 Here are several factors that may have contributed to the fall of gold and silver prices during August:

Here are several factors that may have contributed to the rally of gold and silver during the month:

In the recent FOMC meeting which was held on July 31st and August 1st, the Fed didn’t make any changes in its policy. But the minutes of latest FOMC meeting revealed that the Fed is leaning towards introducing another stimulus plan in the near future. The speech that Bernanke gave in Jackson Hole also left the door open on QE3 in 2012. I still think it could be awhile before the Fed will issue QE3.