Gold and silver changed direction and rose on Thursday after they had declined for three consecutive days. The U.S reports that came out yesterday and showed a mixed signal: the U.S rate of existing home sales declined by 5.4%; US jobless claims also changed direction and rose to 386k; the Philly Fed index slightly rose but was still negative.  Currently gold and silver are falling. On today’s agenda: Great Britain Net borrowing, and Canada’s Core CPI.

Here is a short outlook for precious metals for Friday, July 20th:

The chart bellow presents the normalized rates of these precious metals during the month (normalized to 100 as of June 29th). 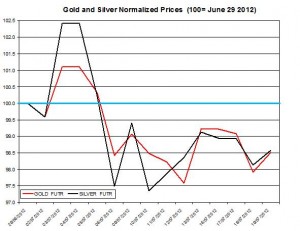 The ratio between the two precious metals edged up on Thursday to 58.07. During July the ratio edged down by 0.05% as gold slightly under-performed silver. 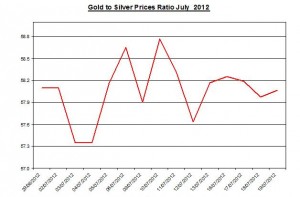 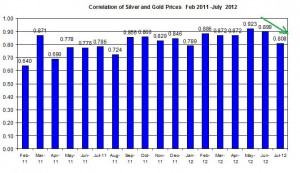 Canada’s Core CPI: According to the Canadian CPI report for May 2012, the CPI rose by 1.2% during the past 12 month up to May – this is a slightly lower rate than in April. This report might affect the Canadian dollar, which is also strongly linked with bullion rates;

Great Britain Net borrowing: this report will show the monthly developments in the public sector net borrowing for June 2012; as of May 2012, the net borrowing reached to £15.6 billion;

The Euro/US Dollar edged down again on Thursday by 0.02% to 1.2281. During the month (UTD) the Euro/USD declined by 3.04%. Alternatively, other exchange rates such as the Australian dollar and Canadian dollar appreciated on Thursday against the USD by 0.62% and 0.27%, respectively. The linear correlation between gold and Euro/USD is 0.69 (daily percent changes, for the last few weeks).  If the Euro/USD and AUD/USD will fall, they may adversary affect precious metals rates. Currently, the Euro/USD is falling.

Current Gold and Silver Rates as of July 20th

Gold and silver may have changed direction and rose along with the rest of the financial markets including oil rates and U.S stock markets. This rally might not last long and precious metals prices might resume their descent. The little improvement in the Philly Fed may have contributed to the rally in commodities rates. The ongoing slowdown in the housing market may have also contributed to the rise in bullion rates. The Canadian report CPI might affect the Canadian dollar which tends to be linked with bullion rates.  If the major exchange rates including Euro, Aussie dollar and Canadian dollar will change direction and depreciate against the USD, this could drag down bullion rates.