Gold and silver didn’t do much on the first day of the week as both precious metals edged down. The U.S retails sales report for June came out yesterday and showed a slight decrease of 0.5% (M-OM).  Currently gold and silver are falling. On today’s agenda: Bernanke’s Testimony in the Senate, U.S Core Consumer Price Index, Great Britain CPI, Governor King will give a speech, German ZEW economic sentiment and Bank of Canada’s Overnight Rate.

Here is a short outlook for precious metals for Tuesday, July 17th:

The chart bellow shows the normalized rates of these precious metals during July (normalized to 100 as of June 29th). 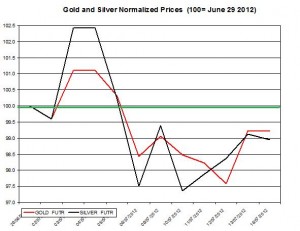 The ratio between the two precious metals edged up on Monday to 58.26. During July the ratio rose by 0.27% as gold slightly out-performed silver. 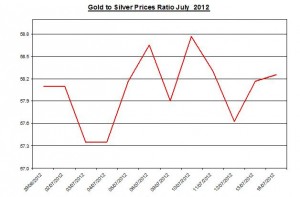 Bernanke’s Testimony: Following the recent publication of the minutes of the FOMC meeting, if Bernanke will hint of another stimulus plan it could rally the commodities markets. The Chairman of the Federal Reserve will testify before the Committee on Banking, Housing, and Urban Affairs in the U.S Senate. The title of the speech is “Semiannual Monetary Policy Report to the Congress“;

U.S Core Consumer Price Index: According to the U.S Bureau of Labor statistics during May, the core CPI edged up by 0.2%(M-o-M) and the index increased over the last 12 months by 2.3%; the CPI declined last month by 0.3%;

Great Britain CPI: in the previous report regarding May the annual CPI decreased from 3.0% to 2.8%; this news may affect the British pound;

German ZEW economic sentiment: During June the ZEW indicator for Germany declined by 27.7 points to -16.9 points; as Germany’s economy is progressing, the Euro will plausibly remain robust against other currencies;

Governor King’s Speech: in his speech he could offer some perceptive behind the recent MPC interest rate decision and monetary policy; this speech may affect British Pound traders;

Bank of Canada’s Overnight Rate: The Bank of Canada will publish its decision regarding the overnight interest rate, which remained flat at 1% in the previous decision.

The Euro/US Dollar edged up on Monday by 0.18% to 1.2271. During the month (UTD) the Euro/USD declined by 3.12%. Further, other exchange rates such as the Australian dollar also slightly appreciated on Monday against the USD by 0.22%. There is still a very strong correlation between Euro/USD and gold. The linear correlation between gold and Euro/USD is 0.70 (daily percent changes, for the last few weeks).  If the Euro/USD and AUD/USD will resume their descent, they could adversely affect precious metals rates. Currently, the Euro/USD is rising.

Current Gold and Silver Rates as of July 17th

Gold and silver started off the week with little movement but they may resume their downward trend if the testimony of Bernanke won’t offer any hints of the Fed’s intent to stimulate the U.S economy by issuing another quantitative easing plan. The upcoming reports mainly U.S core CPI may affect U.S stocks, forex and commodities markets. If BOC will change its monetary policy it may affect not only the Canadian dollar but also bullion rates that are strongly linked to this currency. The European reports may affect the Euro which is also strongly linked with precious metals. Finally, if the major exchange rates including Euro, Aussie dollar and Canadian dollar will appreciate against the USD, this could positively affect bullion rates.