The recent developments in U.S and Europe raised again the talks over the changes in the monetary policies of the major central banks. Many anticipate there will be some sort of quantitative easing in the U.S and Europe during this year. Let’s see how each QE program could affect the price of gold.

There are talks that ECB and FOMC will each independently consider issuing monetary expansion policy or quantitative easing, in which the central bank is basically printing money to buy sovereign debt and expanding the bank’s balance sheet.  The ECB and its president Mario Draghi are considering it in order to bailout the countries and banks that are having a debt problem including Spain, Italy and Greece.

The FOMC is considering QE3 in an attempt to reignite the growth in the U.S economy and perhaps even to slowdown the appreciation of the USD.

Let’s examine how each of these central banks could affect the bullion markets.

Quantitative Easing in the U.S

In the U.S there have already been a couple of quantitative easing programs in the past few years. These programs raised the money supply in the U.S. The rise of the money supply coincided with the increase in the price of gold.

The chart below shows the rise in both U.S money supply and gold price.  During the first half of 2011 the money supply grew as the FOMC implemented QE2. 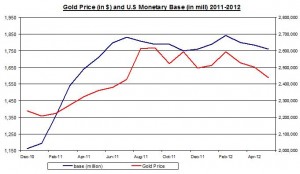 This means if the FOMC were to announce of another quantitative easing during 2012, this could positively affect the price gold.

On the other hand, during the last year the Fed didn’t issue QE3, and instead extended the time span of keeping the interest rate low and also issued operation twist, in which the Bank raised the maturity of its debt without expanding the balance sheet.

Quantitative Easing in the EU

In this case it could be a bit trickier: the price of gold is strongly correlated with the Euro/USD.

The chart shows the development in the linear correlation between gold and Euro/USD. As seen, the relation tends to be strong and positive. If the ECB were to issue a quantitative easing to bailout banks and countries, this could depreciate the Euro which in turn may adversely affect the price of gold. 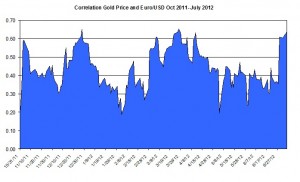 On the other hand, the bailout could also reduce the level of uncertainty in Europe in regards to the debt crisis of struggling banks and countries; thus, the decline of the risk attributed to the EU could strengthen the Euro. Therefore, it’s a bit more complex as to how exactly the market will recast to such an event.

In any case if the ECB and FOMC will consider a QE program, be sure that the bullion market will promptly react to this news and there is a good chance that these programs will reignite the recovery of gold and silver prices.