Following the publication of the recent FOMC meeting minutes, the prices of gold and silver didn’t do much in the past couple of days. The prices of gold and silver inched up yesterday. The U.S jobless claims report came out yesterday: Number of jobless claims rose by 13k to reach 323k. In China, HSBC’s flash manufacturing PMI report turned positive during August for the first time in four months – the index reached 50.1, which means the manufacturing sectors in China are slightly expanding after they had contracted in previous months. This news is likely to positively affect commodities prices including gold and silver. But the main issue will continue to be around the Fed’s next move. On today’s agenda: U.S. New Home Sales, Second estimate of GB GDP Q2 2013, and Canada’s core CPI.

Here is a short review for bullion for Friday, August 23rd:

In the chart below are the normalized prices of precious metals for 2013 (normalized to 100 as of July 31st). The prices of gold and silver have rallied during August. 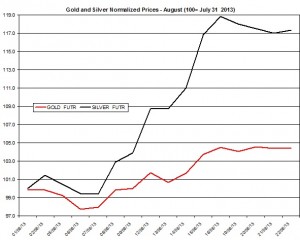 The ratio between the two precious metals changed direction and slipped on Thursday to 59.50. During August, the ratio fell by 11.02% as silver has out-performed gold. 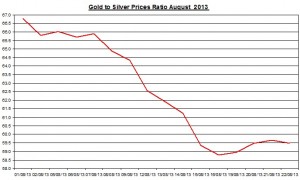 See here the weekly forecast  for gold and silver for August 19-23.

Canada‘s core CPI: This report refers to the CPI and core consumer price index (controlling the volatile components such as energy, fruit and vegetables) for July 2013. Based on the latest Canadian CPI report for June, the core CPI edged down by 0.2%. This report might affect the Canadian dollar, which is also strongly linked with crude oil prices;

U.S. New Home Sales: This report will refer to July 2013; in the latest report (opens pdf; for June), the sales of new homes slightly rose to an annual rate of 497,000 – a 8.3% gain (month- over-month); if the number of home sales will keep rising, it may suggest the housing market in the U.S continues to improving; this news may also affect the US dollar;

The Euro/ USD currency pair inched up on Thursday by 0.01% to 1.3356. During August, the Euro/USD increased by 0.41%. Moreover, other currencies such as the Aussie dollar also slightly appreciated yesterday against the U.S dollar by 0.43%. The correlations among gold, Euro and Aussie dollar have sharply weakened, e.g. the correlation between the Euro/USD and gold price is 0.19 during August. If the correlations will continue to decline, this could suggest the effect the forex market has on precious metals market will fall. The chart below shows the linear correlations among these currencies pairs and precious metals prices during August. 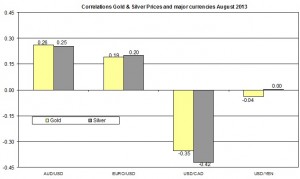