The prices of precious metals have changed direction and rallied yesterday after they had declined for three consecutive business days. Their rally coincided with the rally of the Euro/USD and the drop of U.S stock markets. In the U.S, new orders of manufactured durable goods inched up by 0.1% to reach $224.9 billion. Was the recent recovery of gold and silver driven by change in fundamental estimates or short term speculations? Today’s U.S reports might shed some light on this question. If the upcoming reports don’t meet expectations or even disappoint, gold and silver might continue their recovery. On today’s agenda: Euro Area Monetary Development, GB Current Account, Final U.S GDP 2Q 2013 Estimate, U.S. Jobless Claims, and U.S Pending Home Sales.

Here is a short overview for precious metals for Thursday, September 26th: 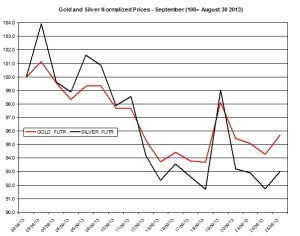 The ratio between the two precious metals inched up again on Wednesday to 61.17. During September, the ratio increased by 2.89% as silver has under-performed gold. 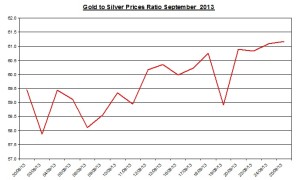 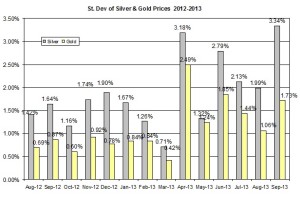 See here the weekly outlook for gold and silver for September 23-27.

GB Current Account: Based on the latest update, the deficit expanded to 14.5 billion pounds.  This report might affect the direction of the British Pound;

Final U.S GDP 2Q 2013 Estimate: In the recent estimate the U.S GDP rose by 2.5% in the second quarter of 2013. If in the last estimate, the growth rate for the second quarter is substantially revised, this could affect not only the US dollar but also precious metals;

U.S. Jobless Claims Weekly Report:  In the latest report the jobless claims rose by 15k to 294k; this upcoming weekly update may affect the U.S dollar and consequently precious metals;

U.S. Pending Home Sales: This report shows the shifts in pending home sales in the U.S for August; in the recent report, the pending home sales index dropped by 1.3% (month-over-month). These data are another signal for the developments in U.S’s housing market; if the housing data shows additional fall in sales, it may pull back the U.S dollar;

On Wednesday, the Euro/ USD currency pair changed direction and also rose by 0.39% to 1.3526. During the month, so far, the Euro/USD rose by 2.30%. On the other hand, other currencies such as the Aussie dollar and Canadian dollar slightly depreciated yesterday against the U.S dollar by 0.24% and 0.14%, respectively. The correlations among silver, Euro and Canadian dollar have weakened during the month, e.g. the correlation between the USD/CAD and silver price is only -0.04 during September. These findings suggest the changes in the forex markets have little effect on the developments in the prices of gold and silver.