The prices of gold and silver started off the week on a positive note as both metals bounced back from last week’s tumble. But this rally might not last long with the FOMC meeting will reveal a change in its monetary policy that includes tapering QE3. The meeting starts today will end tomorrow with a press conference and statement. Until tomorrow, will gold and silver continue to rise? On today’s agenda: German ZEW economic sentiment, GB CPI, Canada Manufacturing Sales, and U.S Core Consumer Price Index.

Here is a short overview for precious metals for Tuesday, September 17th: 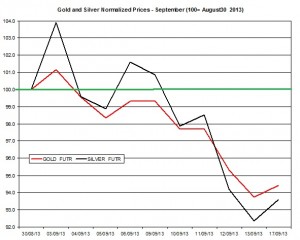 The ratio between the two precious metals slipped on Monday to 59.97. During September, the ratio increased by 0.88% as silver has slightly under-performed gold. 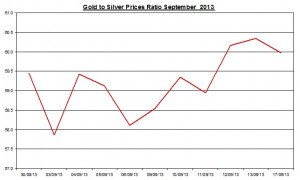 The gold and silver futures volumes of trade have fallen in recent days and reached on Monday 166 thousand and 46 thousand, respectively. If the volume picks up this week, this could suggest the chances of sudden sharp move in the prices of gold and silver due to high volume will rise. 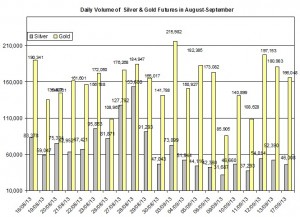 GB CPI: In the previous report regarding July 2013, the CPI inched down to an annual rate of 2.8%; if the inflation rate continues to fall, it may eventually affect the decision of BOE regarding its monetary policy;

U.S Core Consumer Price Index: This monthly report pertains to the main developments in the core consumer price index for August 2013. In July, the CPI inched up by 0.2% (month-over-month); the core CPI also edged up by 0.2%; the core index increased over the past twelve months by 1.7%.

U.S. TIC Long Term Purchases: The Treasury International Capital monthly report will present the changes the purchases and sales of US long term treasuries for July 2013. In the recent report regarding June 2013, the net foreign sales of U.S Treasuries longer-term notes reached a deficit of $66.9 billion;

On Monday, the Euro/ USD currency pair slightly increased by 0.30% to 1.3344. During the month, so far, the Euro/USD rallied by 0.85%. Moreover, other currencies such as the Aussie dollar and Canadian dollar also appreciated yesterday against the U.S dollar by 0.79% and 0.26%, respectively. The correlations among gold, Euro and Aussie dollar have weakened in recent weeks, e.g. the correlation between the Euro/USD and gold price is 0.23 during August-September. The chart below shows the correlations among precious metals prices and leading currencies pairs. These weaker correlations suggest the movement of the USD against other currencies have had a lesser effect on bullion rates. 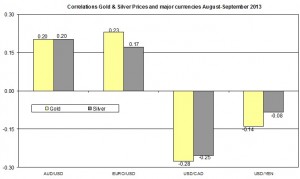 Current Gold and Silver Rates as of September 17th