The prices of gold and silver resumed their upward trend and rallied the first day of the month. The recent rise in precious metals prices coincided with the sharp rise of the Aussie dollar against the USD. In Australia, the RBA decided to keep its policy unchanged and the interest rate remained at 2.5%. This news may have contributed to the latest rise of the Aussie dollar. In the U.S, manufacturing PMI slightly increased by 0.3 percentage points towards 55.7%. This positive news may have helped pull up the USD against the Euro. Will gold and silver continue to rise? On today’s agenda: Canadian Trade Balance, American Trade Balance, Bank of Canada’s Overnight Rate, Australian GDP Second Quarter 2013, and GB Services PMI.

Here is a short overview for bullion for Wednesday, September 4th:

In the chart below are the normalized prices of precious metals for 2013 (normalized to 100 as of July 31st). The prices of gold and silver have risen in recent weeks. 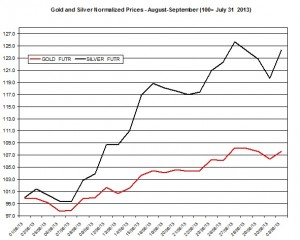 The ratio between the two precious metals tumbled down again on Tuesday to 57.87. During last month, the ratio decreased by 13.85% as silver has out-performed gold. 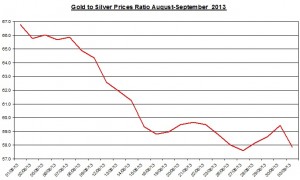 The gold and silver futures volumes of trade have risen and reached on Tuesday 215 thousand and 73 thousand, respectively. For gold, the volume is at its lowest since mid August.  If the volume will continue to rise this week, this could suggest the odds of sudden sharp move in the prices of gold and silver due to high volume will increase.

See here the weekly outlook for gold and silver for September 2-6.

Australian GDP Second Quarter 2013: In the first quarter of 2013, the GDP grew by 0.6% (seasonally adjusted). Australia is among the leading countries in exporting commodities including as oil, LNG, and metal ores to big economies such as China and Japan ; if the GDP growth rate will rise, it could affect the Australia dollar (see here last report);

GB Services PMI: In the last report, this index increased to 60.2%; this index may affect the British Pound’s movement;

Canadian Trade Balance: In the latest report regarding June 2013, exports rose by 1.4% and imports increased by 0.6%; as a result, the trade balance’s deficit narrowed from $781 million in May to $469 million in June; this report may affect the Canadian dollar, which tends to be linked with commodities;

American Trade Balance: This monthly update for July will show the developments in imports and exports of goods and services to and from the U.S, such as commodities such as oil and gas; according to the latest American trade balance update regarding June the goods and services deficit contracted to $34.2 billion;

Bank of Canada’s Overnight Rate: The Bank of Canada will announce its Canadian overnight rate decision – the rate is currently set at 1%. The BOC may keep its policy and maintain its interest rate at 1%; the economic changes in Canada and the FOMC’s monetary policy might prompt BOC to eventually lower its cash rate;

On Tuesday, the Euro/ USD currency pair declined by 0.39% to 1.3170. During last month, the Euro/USD slipped by 0.39%. Conversely, other currencies such as the Canadian dollar and Aussie dollar appreciated yesterday against the U.S dollar by 1.82% and 0.02%, respectively. The correlations among gold, Euro and Aussie dollar weakened in recent weeks, e.g. the correlation between the USD/CAD and gold price is -0.41 during August-September. The chart below shows the correlations among the leading currencies pairs and precious metals during the past several weeks. 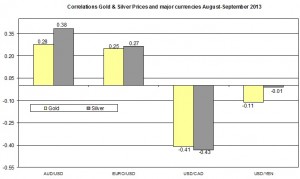 Current Gold and Silver Rates as of September 4th