Gold prices didn’t do much during March, but silver price showed one its strongest months in a long time; does someone recall that during January silver and gold prices declined?

During March gold prices increased by 0.6% from beginning to end of the month and its average price rose by 3.42%.

The average silver price increased by 15.75% in March, compared to February’s average price; it also rose by 10% during March (beginning to end).

In the following graph is the gold and silver prices changes during March  2011, in which both precious metal prices are normalized to the beginning of the month 1/3=100. 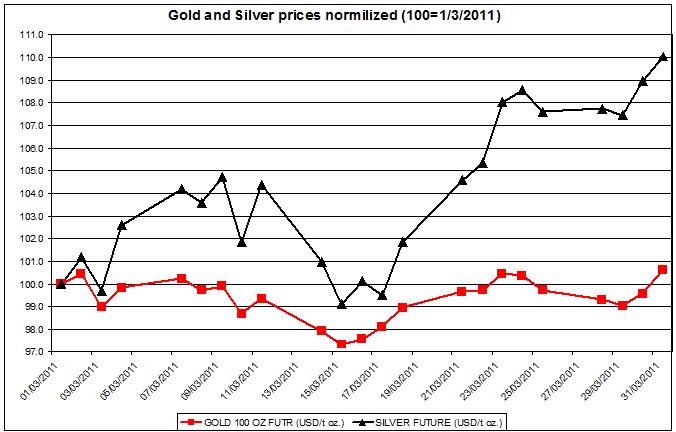 The chart above clearly shows how gold price in March 2011 didn’t increase much, while silver prices increased precipitately, especially since March 17th 2011.

In the graph below is the ratio of gold to silver prices during March: it shows how there is a decline in their ratio during March, which represent silver outperforming gold. 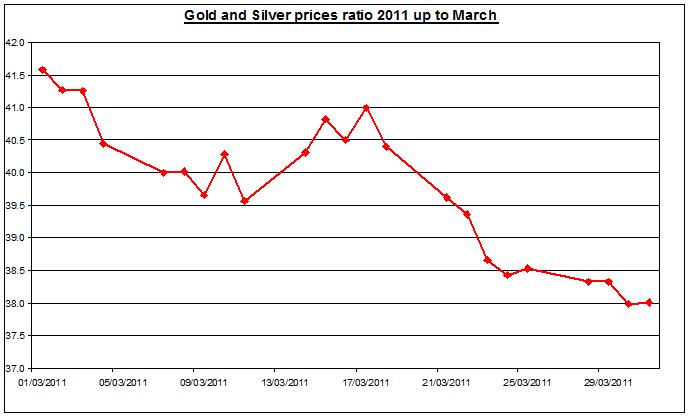 Gold and silver prices were very highly correlated to one another, despite the gap in the trends between the two: during March their linear correlation of their daily percent changes was 0.871. This is a rise in the correlation, after it was only 0.64 during February 2011. See here for more on the reasons silver prices outperformed gold prices in 2011.

This correlation might be one of the factors related to the rise in silver prices during the month.

Another factor that might be related to the changes in gold and silver prices is the tsunami attack in Japan. This turmoil have affected the financial markets in the world in a way that might have driven traders towards precious metals, which are normally referred to as safe haven in times of uncertainty.

Following the tsunami attack, Bank of Japan decided to “print” 15 trillion yen (about 183 billion US dollar), in order to cope with this disaster. This decision might have also affected major currencies such as Yen and USD. Since BOJ has a lot of US dollars in its reserves, it will probably start to sell them in order to implement this maneuver. If so, this might depreciate the US dollar and drive investors and traders towards commodities such as gold and silver.

It will remain to be seen if these factors will continue to affect the commodity market in the following weeks.