Gold and silver prices edged down for the second consecutive day. Other commodities also declined. The Euro and Aussie dollar slipped yesterday and may have contributed to the decline of precious metals rates. A couple of U.S reports came out yesterday and showed some signs of slow recovery: the U.S GDP for Q2 was revised up from 1.5% to 1.7% growth; pending homes sales rose in July.   Today, the symposium at Jackson Hole will start. The symposium will include Bernanke’s speech tomorrow. Currently, gold and silver prices are falling. On today’s agenda: Italian 30 Year Bond Auction, and U.S. Jobless Claims.

Here is a short outlook for precious metals for Thursday, August 30th:

In the chart below are the daily changes of normalized prices of precious metals during the month (normalized to 100 as of July 31st). During recent weeks gold and silver traded up. 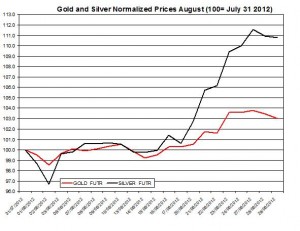 The ratio between the two precious metals edged up again on Wednesday to 53.78. During August the ratio fell by 7.02% as gold has under-performed silver. 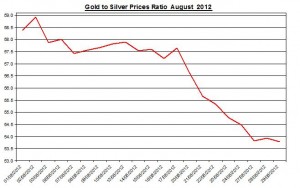 U.S. Jobless Claims Weekly Report:  in the recent report the jobless claims rose by 4k to 372,000; this upcoming weekly update may affect the U.S dollar and consequently bullion rates;

Italian 30 Year Bond Auction: the Italian government will issue its first bond auction for this month; in the previous bond auction, which was held at the end of July, the average yield reached 5.96%;

The Euro/ USD changed direction again and edged down on Wednesday by 0.27% to 1.2531. During August (UTD) the Euro/USD rose by 1.84%. Further, other currencies including Aussie dollar also depreciated on Wednesday against the USD by 0.25%. The Canadian dollar depreciated against the USD by 0.13%. The linear correlations among precious metals and Euro are still positive and strong: during August, the correlation between the gold and EURO/USD reached 0.514 (daily percent changes); between gold and AUD/USD the correlation declined to 0.27. This means, if these currencies pairs will continue to fall against the USD, it could also pull down the prices of precious metals. Currently, the Euro/USD is rising.

Current Gold and Silver Rates as of August 30th

The prices of precious metals declined again on Wednesday for the second consecutive day. The recent deprecation of the Euro and Australian dollar may have contributed to the decline of the rates of bullion. If these currencies will continue to fall, then they may drag down gold and silver. The U.S report regarding the GDP and pending home sales may have slightly affected not only the USD but also bullion rates. But metals traders will continue to wait for tomorrow’s event – Bernanke’s speech that might affect the bullion market. Finally, the U.S jobless claims could also affect not only the USD but also commodities rates if the report will present a sharp shift from last week’s figures.