The prices of gold and silver didn’t do much during the past week: The price of gold inched up by 0.06%, while silver slipped by 1.1%. This brings the past three weeks’ rally of both gold and silver to a halt.  I think the low trading volume and the anticipation of the next  FOMC meeting could eventually lead to a reversal in the recent rise of precious metals – providing, of course the FOMC will delay the tapering of its asset purchase program in the coming months. Until then, the progress of the U.S economy may affect precious metals: If the U.S economy shows signs of growth, bullion investors may consider these signs as higher odds for the FOMC to taper QE3. During last week several U.S reports came out: GDP for the second quarter was revised up from 1.7% to 2.5%; jobless claims fell by 6k to reach 331k; consumer confidence remained virtually unchanged during August; new durable goods orders declined during the past month.  Finally, China’s manufacturing PMI increased to 51 during August – a positive sign of China’s progress and may have positively affected commodities rates.

Here is a short review of the latest shifts in precious metals prices between August 26th and August 30th:

The chart below shows the changes in precious metals prices, in which they are normalized to 100 as of August 23rd. Gold and silver prices didn’t move much during the week. 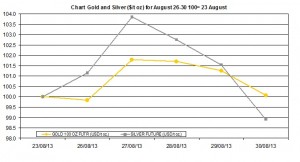 The second chart presents the daily percent shifts of bullion prices (or in other words the shifts around the trend). Silver and gold didn’t move by sharp shifts during most of the week except on Tuesday and Friday. Precious metals prices daily percent changes ranged between 2.7% gain and 2.6% drop. 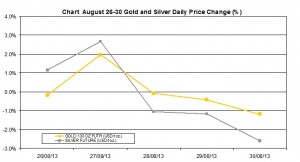