The prices of gold and silver didn’t do much yesterday as they both changed direction again and slipped on Thursday. Nonetheless, throughout the week both precious metals moved in an unclear trend as they zigzagged from gains to losses on a daily scale.   In the U.S the government shutdown continues. This shutdown also means that U.S official reports such as the non-farm payroll report won’t be published this week. In the meantime, yesterday a couple of reports showed mixed signals regarding the progress of the U.S economy: jobless claims remained low with a rose of 1k to reach  308k; non-manufacturing PMI report showed the index fell to 54.4 points – this means the non-manufacturing sectors are growing at a slower pace. These news items, however, seem to have little effect on the forex and commodities markets. Will gold and silver continue to zigzag? On today’s agenda: Canada’s Ivey PMI, and Japan’s monetary policy meeting and press conference.

Here is a short overview for precious metals for Friday, September 4th: 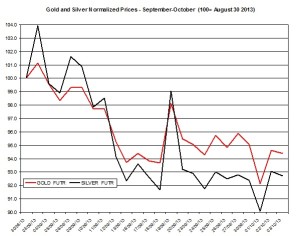 The ratio between the two precious metals slightly rose on Thursday to 60.53. During the week, the ratio decreased by 1.07% as silver has slightly out-performed gold. 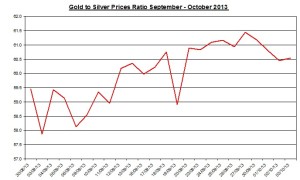 Canada‘s Ivey PMI: This report presents the diffusion index based on surveyed purchasing managers; in the recent monthly update, the index rose to 51. The report might affect the Canadian dollar.

On Thursday, the Euro/ USD currency pair rose again by 0.29% to 1.3619. During the week, the Euro/USD increased by 0.72%. Further, other currencies such as the Canadian dollar and Aussie dollar also slightly appreciated yesterday against the U.S dollar by 0.10% and 0.04%, respectively. The correlations among gold, Euro and Aussie have weakened in recent weeks, e.g. the correlation between the Euro/USD and gold price is only 0.21 during September/October. The chart below shows the correlations among forex and precious metals prices. 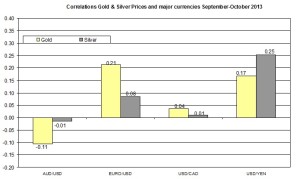