Precious metals price changed direction and declined during most of last month. Despite the commencement of QE3 by the FOMC it didn’t seem to affect much the prices of gold and silver. This news may, however, start affecting the prices of precious metals in the near future. Conversely, the ongoing developments in Europe, including the riots in Spain, Greece and Italy, may have curbed the rally of the Euro during last month. The modest rise of Euro/USD, mainly during the first couple of weeks of October may have slightly curbed the decline of precious metals prices. Will gold and silver change direction and rally during November? The main events of the month will continue to be around the FOMC, the EU debt crisis and the economic progress of China U.S and Europe. The FOMC will publish the minutes of the recent meeting. The ECB will announce its interest rates and might start its bond purchase program to help Spain in raising debt.

Let’s analyze the precious metals market for October and provide a short outlook for gold and silver for November 2012:

Gold and silver rates started off the month with little movement and an unclear trend as both precious metals remained virtually unchanged during the first part of the month but then they changed pace and traded down during the second part of the month.  Most of the drop in prices came as other commodities and stock prices declined; the U.S economy showed some signs of growth; the FOMC left its policy unchanged.

During the first part of October, the U.S dollar depreciated against the Euro and Canadian dollar; the Euro/USD and USD/ CAD currency pairs are usually strongly correlated with gold and silver prices. Conversely, during the first part of the month, the U.S dollar appreciated against the Yen and Australian dollar; this mixed trend may have contributed to the low volatility of gold and silver.  During the second part of the month, the Euro/USD edged down; USD/ CAD rose. The appreciation of the USD may have also pulled down gold and silver.

The chart below presents the shifts of gold and silver prices during October, in which the prices are normalized to 100 on September 28th 2012. 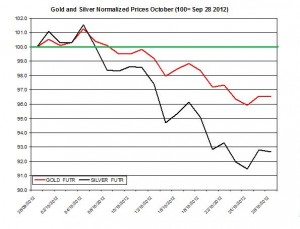 The next chart shows the shifts in the ratio of gold to silver (gold price/silver price) during October; the ratio had a modest upward trend mainly during the month. The ratio rose as silver price has under-performed gold price. In the last week of October the ratio ranged between 53 and 54. 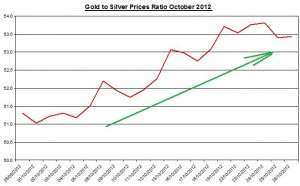 Here are several factors that may have contributed to the fall of gold and silver prices during the month:

In conclusion, I speculate gold and silver will change direction and trade slightly up as the effect of QE3 and the expansion of the U.S money base may positively affect bullion prices. Further, the low volatility in the precious metal market may continue in November. Conversely, if the U.S economy will continue to show some progress in the labor and manufacturing sectors (Philly Fed, non-farm payroll report, and PMI manufacturing) this could curb the rally of bullion rates as these reports lower the chances of the Fed expanding their stimulus plan in the near future. If the U.S stocks and commodities prices will change direction and rally they could also positively affect gold and silver. The anticipations of the market for ECB to intervene in the Euro market and ease Spain’s debt crisis might keep the Euro strengthening, which is strongly and positively correlated with precious metals rates. The U.S elections will be over and the U.S financial news could talk about the “fiscal cliff” that could pull down the USD and thus may positively affect precious metals prices. The recent depreciation of the Indian Rupee is likely to adversely affect gold. I still think that even though the prices of gold and silver will zigzag throughout the month, their general direction will be upward.  Finally, if major currencies including Euro and Aussie dollar will rise against the USD, then this could help pull up gold and silver .