The prices of gold and silver started off the week on a negative note and slipped on Tuesday. Moreover, the volume of trade also picked up after the markets were closed on Monday. Will gold and silver change direction again and rally? On today’s agenda: Japan’s rate decision and press conference, Great Britain Claimant Count Change, MPC Asset Purchase and Rate Votes, Bank of Canada’s Overnight Rate and Press Conference, Bank of Canada’s Monetary Policy Report, China Manufacturing PMI.

Here is a short overview for precious metals for Wednesday, January 22nd: 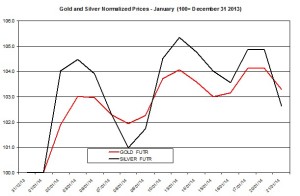 The ratio between the two precious metals rose on Tuesday to 62.56. During January, the ratio edged up by 0.67% as silver has moderately under-performed gold. 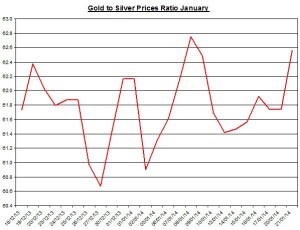 The gold and silver futures volumes of trade have increased and reached on Tuesday 204 thousand and 50 thousand, respectively =- the highest level in recent weeks. The volume of trade is likely to remain high for the rest of the week. The chart below shows the changes in the volume of trade in the past several weeks. 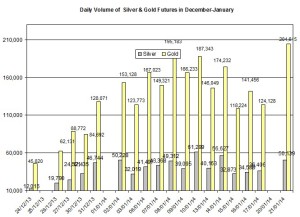 Japan’s rate decision and press conference: In the upcoming Japanese monetary policy meeting, BOJ members will announce of any changes to the bank’s current asset purchase program. This decision may affect the Japanese yen;

Great Britain Claimant Count Change: As of last month, the number of unemployed in GB fell again by 36.7k; the rate of unemployment edged down to 7.4%;

Bank of Canada’s Overnight Rate and Press Conference: The Bank of Canada will decide on its overnight rate decision – the rate is currently set at 1%. The BOC may leave its policy unchanged and maintain its interest rate at its current level; the economic developments in Canada might prompt BOC to eventually reduce its cash rate;

On Tuesday, the Eur/USD currency pair inched up by 0.07% to 1.3561. During January, the Eur/USD decreased by 1.32%. Conversely, other currencies such as the Japanese yen and Aussie dollar slightly depreciated yesterday against the U.S dollar by 0.12% and 0.06%, respectively. The correlations among gold, silver and Aussie have slightly strengthened in recent days, e.g. the correlation between the AUD/USD and gold price is only 0.25 during December/January. This could suggest the shifts of the gold and silver prices have little to do with the changes in the forex market.

← Is Natural Gas Heading towards $4.5?
Why BP Will Continue to Recover? →