The prices of precious metals didn’t do much yesterday and inched up after they had plummeted a day earlier. Their modest gain was despite the decline of the many “risk related currencies” such as Euro and Aussie dollar against the USD and tumble of energy commodities prices such as natural gas and oil. Will this low volatility of gold and silver from yesterday continue today? Currently, gold and silver are trading up. Yesterday, U.S jobless claims changed direction and rose by 20k to 362k; the Philly Fed Index fell to -12.5 in February. This news items may have contributed to the rally of precious metals as these reports indicated the U.S economy isn’t progressing, which raised the bearish market sentiment. On today’s agenda: German Business Climate Survey, Canada’s core CPI, and Canada Retails Sales.

Here is a short outlook for precious metals for Friday, February 22nd:

In the chart below are the normalized prices of gold and silver during February (normalized to 100 as of January 31st). The prices have had declined during most of the month. 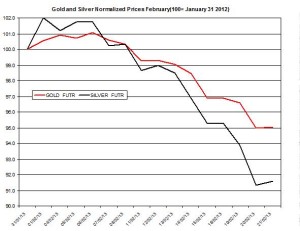 The ratio between the two precious metals decreased on Thursday to 54.99. During the month, the ratio rose by 3.76% as gold out-performed silver. 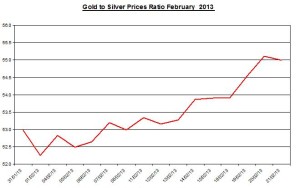 German Business Climate Survey: This survey analyzes the changes (on a monthly basis) of the business climate of Germany. In the previous report for January 2013, the business climate index increased from 102.4 in December to 104.2 in January; if this trend will continue, it might pull up the Euro;

Canada’s core CPI:. According to the Canadian CPI report for December 2012, the core CPI edged up by 0.1% during the month. This report might affect the Canadian dollar, which is also strongly correlated with commodities;

Canada Retails Sales (December 2012): This report will refer to the retails sales in Canada as of December. It may affect the path of USD/CAD currency pair, which is strongly linked with commodities prices. In the recent report regarding November 2012, retails sales edged up by 0.2%.

The Euro/ USD declined again on Thursday by 0.7% to 1.319. During the month, the Euro/USD declined by 2.86%. Moreover, some currencies such as Canadian dollar and Aussie dollar also depreciated yesterday against the USD by 0.17% and 0.1%, respectively. The recent depreciation of these risk currencies didn’t seem influence precious metals traders. The correlations among gold, Aussie dollar and Canadian dollar remained stable in recent weeks: during January/February, the linear correlation between gold and AUD/USD reached 0.393 (daily percent changes); the linear correlation between the gold and USD/CAD reached -0.205 (daily percent changes). These mid-strong correlations suggest the shifts in gold and silver markets were partly affected or resulted from the changes in the foreign exchange markets. Thus, if the Euro and other currencies will appreciate against the USD, they might positively affect gold and silver.

Current Gold and Silver Rates as of February 22nd

Prices of precious metals remained stable yesterday. The U.S dollar appreciated against leading currencies yesterday, but it didn’t seem to affect the direction of bullion rates. The upcoming Canadian reports including CPI retail sales could affect not only the CA dollar but also precious metals prices. If these reports will show growth in the Canadian economy, they could pressure up the prices of precious metals, via the relation with the Canadian dollar. Finally, if the Euro and other “risk currencies” will change course and appreciate during the week against the USD, they might pull up gold and silver.