The prices of gold and silver rose again yesterday and thus completed a two day rally. Many other commodities also increased yesterday. The markets in NY open yesterday for the first time following Hurricane Sandy.  China’s manufacturing PMI rose to 50.2, which means China’s manufacturing sectors expanded during October. This is the first time China’s PMI index passed the 50 point mark since July 2012. This news is likely to keep pulling up commodities prices. Conversely, Canada’s GDP edged down by 0.1% during August. This news is likely to pull down the Canadian dollar against USD. Currently, the prices of gold and silver are edging down. On today’s agenda: GB Manufacturing PMI, ADP estimate of U.S. non-farm payroll, U.S. Manufacturing PMI, FOMC member Lockhart’s Speech, and U.S. Jobless Claims.

Here is a short outlook for precious metals for Thursday, November 1st:

As seen below, the chart presents the developments in the normalized prices of precious metals during the past month (normalized to 100 as of September 28th). During the past couple of days, both gold and silver changed direction and rallied. 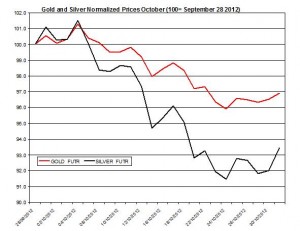 The ratio between the two precious metals declined again on Wednesday to 53.2. During October, the ratio increased by 3.69% as gold slightly out-performed silver. 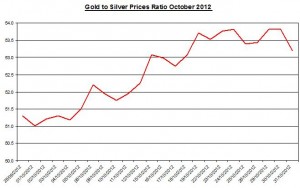 GB Manufacturing PMI: In the recent report regarding September, the index fell to 48.4%. This rate means the manufacturing sector is contracting at a faster pace; this index might affect GB Pound;

U.S. Jobless Claims Weekly Report: in the previous report the jobless claims declined by 23k to 369,000; this upcoming weekly report may affect the U.S dollar and consequently the prices of commodities;

U.S. Manufacturing PMI: The report was supposed to be published yesterday but due to the Hurricane it will be published today. During September 2012 the index increased to 51.5%, which means the manufacturing is growing; this index may affect forex, and commodities markets;

The Euro/ USD also edged up on Wednesday by 0.02% to 1.296. During October, the Euro/USD increased by 0.79%. There were some positive reports of talks between Greece and troika regarding the next cash injection. There are reports that troika to present Greece’s debt proposal before November 12th. These strides in Greece and the recent adverse effect of Hurricane Sandy on the U.S are likely to keep the USD weak. Further, several currencies such as Aussie dollar also appreciated yesterday against the USD by 0.1%. The correlation between gold and Euro remains mid-strong and positive: during October, the linear correlation between gold and EURO/USD reached 0.51 (daily percent changes); the linear correlation between the gold and AUD/USD was 0.34 (daily percent changes). If the Euro and other risk currencies will continue to rally again against the USD, they are likely to pull up gold and silver. 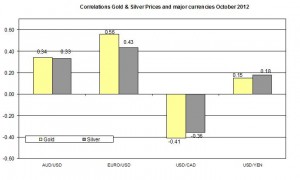 Current Gold and Silver Rates as of November 1st

The prices of precious metals rose again on Wednesday and thus completed a two day rally. The reopening of the financial markets in New York is likely to raise the volatility in the commodities and foreign exchange markets. The recent rise in China’s manufacturing PMI is likely to pressure up commodities rates. The upcoming publication of U.S and GB’s manufacturing PMI reports are likely to be the main events of the day. If U.S manufacturing will rally again, this could pull down the prices of gold and silver via the USD effect. U.S jobless claims could also affect the strength of the USD if the report will show sharp shift from last week’s update. Finally, if the Euro and other “risk currencies” will decline again against the USD, then these currencies are likely to positively affect precious metals rates.