Gold and silver started off the week slightly rising. Will this trend continue? Yesterday, China’s trade balance report came out and revealed China’s exports rose by a much lower pace than many had anticipated. This news, however, didn’t seem to affect much the financial markets. Today will start a two day meeting of the FOMC that will conclude tomorrow with a statement and a press conference.  Will the Fed introduce additional monetary steps to help jump-start the U.S economy? On today’s agenda: German ZEW economic sentiment, Canadian Trade Balance and American Trade Balance.

Here is a short outlook for precious metals for Tuesday, December 11th:

As seen below, the chart presents the developments in the normalized prices of precious metals during November and December (normalized to 100 as of November 16th). During recent weeks the price of silver increased while the price of gold remained nearly unchanged. 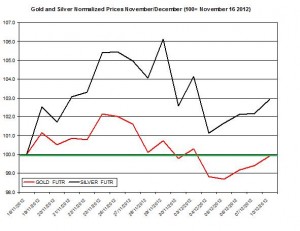 The ratio between the two precious metals remained virtually unchanged on Monday and reached 51.42. During the month, the ratio edged down by 0.2% as gold slightly under-performed silver. 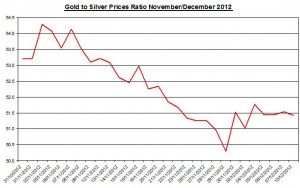 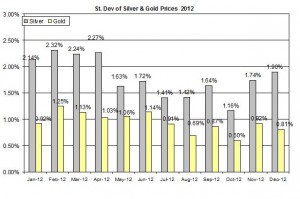 American Trade Balance: This report regarding October will show the recent developments in imports and exports of goods and services to and from the U.S, including commodities such as oil and natural gas; according to the previous American trade balance report regarding September the goods and services deficit declined during the month to $41.5 billion; if the trade balance will rise on account of an increase in imports of goods, this could suggest a rise in demand for commodities in the U.S;

German ZEW economic sentiment: According to the previous report regarding November, the ZEW indicator for Germany declined by 4.2 points to -15.7 points; if Germany’s economic sentiment will further dwindle, the Euro will plausibly remain weak against leading currencies;

Canadian Trade Balance: In the previous report regarding September, exports rose by 1.9% and imports were unchanged as a result, the trade deficit contracted from a $1.5 billion deficit in August to $0.8 billion deficit in September; this report may affect the Canadian dollar, which tends to be strongly correlated with prices of commodities;

The Euro/ USD edged up on Monday by 0.08% to 1.2937. During the month, the Euro/USD slipped by 0.38%. Moreover, some currencies such as Canadian dollar appreciated yesterday against the USD by 0.21%. This low movement may have contributed to the low volatility of bullion prices. The correlations among gold, silver Euro and Aussie weakened in recent days: during November/December, the linear correlation between gold and Euro /USD reached 0.317 (daily percent changes); the linear correlation between the gold and AUD /USD reached 0.36 (daily percent changes). Thus, if the Euro and other risk currencies will change direction and edge down against the USD, they are likely to pull down gold and silver.

Current Gold and Silver Rates as of December 11th

The prices of gold and silver started off the week with little movement but may start to pick up and rise as the week will progress. The low volatility in the bullion market is likely to continue today as precious metals investors are waiting for the upcoming FOMC meeting statement that will be published tomorrow. The upcoming reports reading the trade balance changes in U.S and Canada could affect their respective currency as these reports will suggest the progress of these economies. If the U.S trade balance report will show growth (in exports) this could strengthen the USD and thus pull back gold and silver prices. If Canada’s trade balance report will show little growth in the Canadian economy, this could pull down the Canadian dollar and consequently adversely affect bullion prices. Finally, if the Euro and other “risk currencies” will trade down today against the USD, they are likely to pull back precious metals.

← How Will the Fiscal Cliff Affect Gold and Silver?
Gold, Silver and Natural Gas Declined on Tuesday – Recap December 11th →