The prices of gold and silver changed direction and declined yesterday despite the depreciation of the USD against major currencies including the Euro and Aussie dollar. The low volatility in the precious metals continued but might start to rise in the days to follow. The FOMC meeting will conclude today with a statement and press conference. Many expect the FOMC will introduce additional stimulus plans to jump start the U.S economy (update: FOMC expanded QE3 by $45 billlion). How will this news affect precious metals prices? Currently, the prices of gold and silver are rising. On today’s agenda: FOMC Meeting Statement, Bank of Australia Governor Stevens speaks, Claimant Count Change, Britain’s unemployment Change and U.S 10 Year Bond Auction.

Here is a short outlook for precious metals for Wednesday, December 12th: 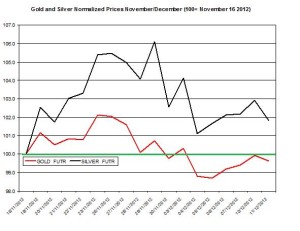 The ratio between the two precious metals remained virtually unchanged on Tuesday and reached 51.84. During the month, the ratio edged up by 0.6% as gold slightly out-performed silver. 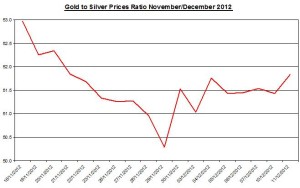 FOMC Statement: in September’s FOMC meeting, the Fed launched QE3. Since then the FOMC didn’t update its monetary policy. Operation twist, in which the Fed extends the maturity of its assets, will end this month. This could suggest the FOMC might decide to update. Moreover, in light of the fiscal cliff, the low expectations of Congress reaching an agreement on the ways to reduce the deficit, and the slow growth of the U.S economy, the Fed might decide to expand QE3 to include other securities and not just mortgage backed securities. Such a decision might pull up bullion prices for a short term. I’m still skeptic that the Fed will expand its QE3 in this meeting, and think the FOMC may decide to make this decision in 2013. Nonetheless, even if the FOMC won’t announce of additional monetary steps, but will allude to the fact in the near future, this news is likely to pull up precious metals prices;

The table below shows the changes in precious metals prices on the day each FOMC meeting ended this year and the next day. As seen, back in September precious metals hiked on the day the FOMC launched QE3 but soon after they remained nearly unchanged.

Claimant Count Change: This report will present the developments in the number of unemployed in GB; as of last month’s report this figure had increased by 10.1k;

Britain‘s unemployment Change: the rate of unemployment of the Britain edged down to 7.8%. This mean, the employment situation in Britain only slightly improved. If in the upcoming report this trend will continue, it may positively affect the British Pound;

U.S 10 Year Bond Auction: the U.S government will issue another bond auction; in the previous bond auction, which was held at the first week of November, the average rate reached 1.68%; if the rate will continue to dwindle, it could suggest that more traders become more bearish;

The Euro/ USD rose again on Tuesday by 0.52% to 1.3004. During the month, the Euro/USD edged up by 0.14%. Moreover, some currencies such as Aussie dollar also appreciated yesterday against the USD by 0.37%. This low movement may have contributed to the low volatility of precious metals prices. The correlations among gold, silver Euro and Aussie sharply weakened in recent days: during November/December, the linear correlation between gold and Euro /USD reached only 0.07(daily percent changes); the linear correlation between the gold and AUD /USD reached 0.2 (daily percent changes). Nonetheless, if the Euro and other risk currencies will rise again against the USD, they are likely to pull up gold and silver.

Current Gold and Silver Rates as of December 12th

The prices of gold and silver didn’t do much in the past several days. The low volatility in the bullion market is likely to rise today as precious metals investors might react to the news of the FOMC decision. The FOMC meeting will conclude today with a statement and press conference. Many expect the FOMC will introduce additional stimulus plans to jump start the U.S economy. Even if so, I suspect such an announcement will have a short term positive effect on gold and silver prices.

The upcoming reports reading Claimant Count Change in GB, and Britain’s unemployment Change could affect the British Pound, which also has a positive and mid-strong relation with precious metals ( the linear correlation between gold and British Pound during recent weeks reached 0.48). If these reports will show the economy is progress it could pull up the British Pound. Nonetheless, based on the past, it’s very likely that precious metals will remain virtually unchanged until after the release of the FOMC statement. Finally, if the Euro and other “risk currencies” will trade up today against the USD, they are likely to positively affect precious metals.