The prices of gold and silver continued to decline yesterday. Currently gold and silver are tumbling down. Some consider the news of the minutes of the  FOMC meeting may have contributed to the sharp fall in precious metals prices.  On today’s agenda: Claimant Count Change, Minutes of MPC Meeting, German 10 Year Bond Auction, U.S. Housing Starts and building permits (update: housing starts declined last month), U.S. Producer Price Index and minutes of the FOMC meeting.

Here is a short outlook for precious metals for Wednesday, February 20th:

In the chart below are the normalized rates of gold and silver during February (normalized to 100 as of January 31st). The prices have had a downward trend in recent weeks. 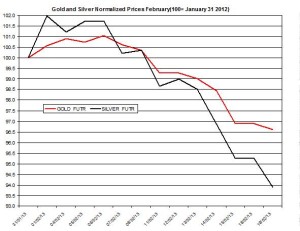 The ratio between the two precious metals rose on Tuesday to 54.53. During the month, the ratio increased by 2.9% as gold out-performed silver. 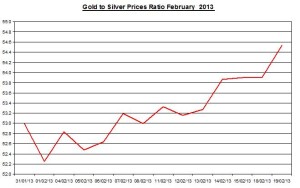 The gold and silver futures volumes of trade have declined on Tuesday (compared to Friday) to 242 thousand and 97 thousand, respectively. These numbers are still higher than average volume recorded during the month.  Perhaps the upcoming publication of the minutes of the FOMC will keep raising the market volume during the day. In such a case, we might see sharp movement in precious metals prices as was the case last week. The chart below presents the volume of trading gold and silver futures in the CME during January and February. 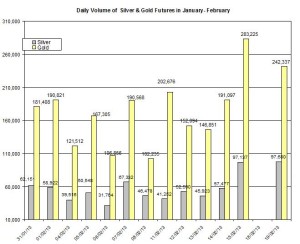 Minutes of January’s FOMC Meeting: Update: the Fed released the minutes of the last meeting. As suspected, some analysts consider the minutes revealed that the FOMC might change the pace of the current $85 billion a month long term assets purchase. This news may have been among the key factors for the sharp decline in the prices of gold and silver.

Following the previous FOMC meeting, in which the Fed kept its monetary policy unchanged, the bullion market had a very short term reaction to this news – gold and silver prices increased on the day of the announcement only to tumble down the next day. The minutes of the latest FOMC meeting might add some insight behind the speculations around the future steps of the FOMC; the minutes might clarify the Fed’s course of action vis-à-vis the exit strategy for its current running QE programs. If the Fed will put a time limit or hint of changes in the expansion of its monetary policy, this could pull down bullion prices;

Claimant Count Change: This report will show the developments in the number of unemployed in GB; as of the previous month’s report this figure had decreased by 12.1k;

Minutes of MPC Meeting: in the latest MPC meeting, the Bank kept the rate unchanged at 0.5% and the asset purchase program at £375 billion; the MPC still has concerns regarding GB’s inflation rate. The minutes of the previous meeting might offer some insight behind this decision;

German 10 Year Bond Auction: the German government will issue its monthly with bond auction; in the latest auction, which was held during January, the average rate reached 1.56%;

U.S. Housing Starts: this report was historically correlated with gold– as housing starts rise, gold prices tended to decline the following day; in the previous monthly report, the adjusted annual rate reached 954,000 in December 2012, which was 12.1% above November’s rate;

U.S. PPI: This report will present the changes in the PPI during January 2013, i.e. the inflation rate from the producers’ stand point. In the previous report regarding December, this index for finished goods declined by 0.2% compared with November’s rate but rose by 1.3% in the past 12 months; this news might affect commodities;

The Euro/ USD rallied on Tuesday by 0.26% to 1.3386. During the month, the Euro/USD declined by 1.42%. Moreover, some currencies such as Japanese yen and Aussie dollar also appreciated yesterday against the USD by 0.42% and 0.49%, respectively. The recent appreciation of these currencies may have influenced bullion traders. The correlations among gold, Aussie dollar and Japanese yen remained stable in recent weeks: during January/February, the linear correlation between gold and AUD/USD reached 0.29 (daily percent changes); the linear correlation between the gold and USD/Yen reached -0.30 (daily percent changes). These mid-strong correlations suggest the changes in gold and silver markets were partly affected or resulted from the developments in the foreign exchange markets. Thus, if the Euro and other currencies will continue to appreciate against the USD, they might positively affect gold and silver.

Prices of precious metals declined during most of the month. The U.S dollar appreciated against leading currencies during recent weeks, which could have contributed to the tumble of bullion rates, but I still think the developments in the foreign exchange markets have had a limited affect on precious metals rate. The upcoming U.S reports including PPI and housing starts could affect the USD, which, in turn could also affect the direction of bullion rates. If these reports will show growth in the U.S economy, they could pull down the prices of precious metals. Today, the minutes of the January FOMC meeting might offer some perspective on whether the FOMC will put a time limit on the Fed’s current QE3 program. In such a case, precious metals prices might react to this news and decline. Finally, if the Euro and other “risk currencies” will continue to appreciate during the week against the USD, they might pull up precious metals.