The bullion market cooled down in the past several days. This low movement might start to pick up today as three main news items will close the week: today’s FOMC statement, tomorrow’s ECB rate decision and Friday’s non-farm payroll report. Will these items stir up the precious metals markets? Yesterday, China’s Manufacturing PMI came out and slipped to 50.6 in April, which means the manufacturing sectors in China are growing at a slower pace. This news may pull down commodities prices. Conversely, in the U.S, consumer confidence rose in April. Yesterday started the two day FOMC meeting. The FOMC will publish today its statement regarding its monetary policy (update: the Fed left its asset purchase program at $85 billion). Will gold and silver react to this news? Currently, the price of gold and silver are falling. Besides the FOMC statement, on today’s agenda: U.S. Manufacturing PMI (update: the PMI fell again but remained above 50), GB Manufacturing PMI, ADP estimate of U.S. non-farm payroll (update: the ADP reported jobs grew by 119kj), BOC Gov Carney Speaks and Japan’s monetary base.

Here is a short outlook for precious metals for Wednesday, May 1st: 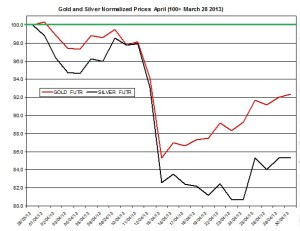 The ratio between the two precious metals slightly rose on Tuesday to 60.98. During the month, the ratio rose by 8.17% as gold out-performed silver. 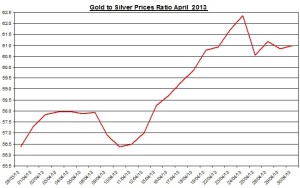 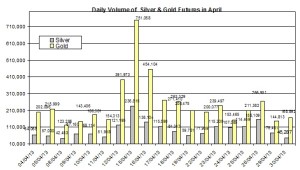 FOMC Meeting: The FOMC will convene for the third time this year and announce at the end of two day of session of any updates to its monetary policy and interest rate. In the past couple of meetings the FOMC left its policy unchanged. Moreover, the meeting had little effect on the markets including precious metals. I suspect this will be the case this time. The statement won’t reveal much about the future steps of the Fed and only the minutes might shed some light on the deliberations among the FOMC members. Even in the press conference Bernanke doesn’t offer much news or updates that could stir up the markets. The big question will remain whether the Fed will change its policy in 2013. If the Fed will actually decide to cut its current asset purchase program, this news is likely to drag down precious metals during the next couple of days.

The table below shows the market reaction to the news of the FOMC meeting statement. As seen, in the past several statements the prices of gold and silver zigzagged from gains to losses (or visa versa)

BOC Gov Carney Speaks: Carney will speak at the University of Alberta, in Edmonton. His speech might affect the Canadian dollar if his speech will provide a surprising headline;

Japan’s monetary base:Japan’s changes in its monetary base will come out. The rise in the asset purchase program of Bank of Japan is likely to pull up the monetary base and thus may show signs of the economy heating up. According to the recent report, the monetary base rose by 19.8% in the previous month. This report might affect the Japanese yen;

The Euro/ USD also increased again on Tuesday by 0.53% to 1.3168. During last month, the Euro/USD rose by 2.75%. Moreover, other currencies such as the Aussie dollar and Canadian dollar also moderately appreciated during yesterday against the U.S dollar by 0.19% and 0.39%, respectively. The appreciation of these currencies against the U.S dollar may have partly contributed to the recovery of precious metals during Tuesday. The correlations among gold, Canadian dollar and Aussie dollar remained strong: during April the linear correlation between gold and USD/CAD was -0.69 (daily percent changes); the linear correlation between the gold and AUD/USD was 0.65 (daily percent changes). These correlations suggest the rally of precious metals rates was partly related to the changes in the foreign exchange markets.

Current Gold and Silver Rates as of May 1st