Gold and silver prices rose again in yesterday’s trading despite the drop in the other commodities prices such as oil prices and the depreciation of the Euro and Australian dollar against the US dollar. Today there is the ECB rate decision which might have a substantial effect on the forex markets.  Currently, gold and silver are traded slightly up. Today, Great Britain Manufacturing Production will be published, Great Britain’s rate decision will be made, ECB will announce the interest rate for January, the weekly update U.S. unemployment claims will come out and U.S retail sales monthly report will be published.

Here is a market outlook of precious metals prices for today, January 12th: 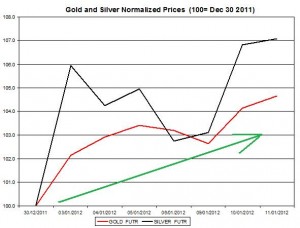 The ratio between gold and silver prices slightly increased  on Thursday, January 12th and reached 54.85. During January the ratio decreased by 2.3% as silver price has slightly outperformed gold price. 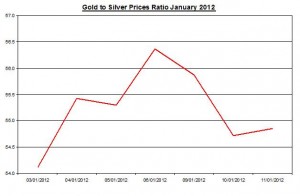 Despite the sharp gains of gold and silver prices during the month, the volatility of these precious metals prices didn’t rise substantially and their standard deviations (of daily percent changes) are similar to the rates recorded in November and December 2011. 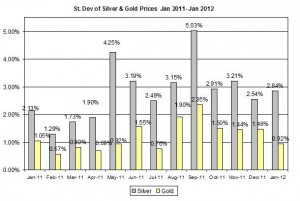 In today’s press conference the President of the European Central Bank, Mario Draghi will announce ECB’s basic interest rate for January and perhaps even a quantitative easing plan (yes, just like in the U.S.), these decisions will be made while the EU debt crisis continues to threaten the EU. The recent publication by Eu Stat showing that the Euro Area inflation rate declined to an annual rate of 2.8% (annual terms) in December despite ECB’s decision from last month to cut the EU rate to 1.00%, may be among the factors to tilt the odds towards another rate reduction. If ECB will cut again interest rates it is likely to pressure down the Euros to US dollar exchange rate and consequently might also affect gold and silver prices;

U.S. Unemployment Claims – weekly update: initial claims fell by 15,000 to 372,000 claims for the week ending on December 31st; the number of insured unemployment declined by 22k to 3.595 million during the week of December 24th;

U.S. Retail Sales Report: this report will present the monthly changes in the retail sales and food services for December; in the previous report, the retail sales, when controlling for the price changes, slightly increased by 0.2% from the previous month; (see here my review of the recent report).

Great Britain Bank Rate Decision : Bank of England will decide on its basic rate for January 2012 and the progress of its asset purchase plan; as of December the BOE’s rate remained unchanged at 0.5% and the asset purchase plan of £275 billion continued;

The major precious metals prices are currently moderately rising in the European markets: