Gold and silver prices continue their upward trend of recent weeks despite their decline on Friday’s trading. Following the recent downgrade of France and eight other EU countries by the credit rating Standard & Poor’s, yesterday the American rating agency cut the rating of the Euro zone’s EFSF rescue fund. This news doesn’t seem the affect forex and commodities traders as commodities markets and the Euro are traded up. The French debt auction seems to go well as the borrowing costs fell. Currently, gold and silver are traded sharply up. Yesterday there was no trading in U.S. markets due to MLK day. Today, Euro Area CPI report will be published, the German ZEW economic sentiment, BOC will decide on its overnight rate and Great Britain’s CPI.

Here is a market outlook of precious metals prices for today, January 17th: 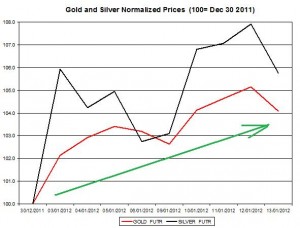 The ratio between gold and silver prices slightly rose on Friday, January 13th and reached 55.24. During January the ratio declined by 1.6% as silver price has slightly outperformed gold price. 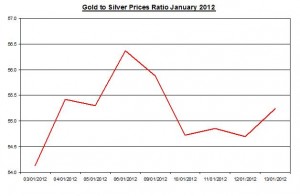 The correlation between gold price and silver price is still high in January as it was in previous months. 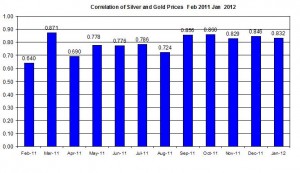 China Grew by 8.9% in the Fourth Quarter

The Chinese economy expanded by only 8.9% during the fourth quarter of 2011 (in annul terms). This growth rate of the Chinese GDP was the lowest growth rate in 10 quarters. This growth rate was higher than what many analysts had expected therefore even though the GDP growth rate was low; it was at least slightly higher than expected. Due to this low GDP growth rate there are speculations that Chinese government may ease the reserve requirements on commercial banks in an attempt to boost the economic growth. If this will be the case, it could boost the economy, but also pressure the inflation. This direction may also positively affect gold and silver prices.

Great Britain CPI: this report will present the yearly rate of GB’s consumer price index for December; some expect the December inflation will be lower than in recent months; in the previous report regarding November the annual CPI declined from 5% to 4.8%;

Euro Area CPI: In last flash report regarding December 2011, the annual inflation rate declined to 2.8%; if the inflation will start to rise it could be among the key factors in affecting the future ECB interest rates decisions;

Bank of Canada’s Overnight Rate: The Bank of Canada will publish its decision vis-à-vis the overnight interest rate, which remained unchanged at 1% during the last decision. The BOC may continue its policy of keeping the interest rate unchanged;

The Euro to U.S Dollar changed direction again and sharply fell on Friday by 1.05% to reach 1.2680; the recent downgrade of France’s credit rating may have affected the Euro to trade down against the U.S. dollar in Friday’s trading. But the current French debt auction seems to go well may keep the Euro strong. If the Euro will appreciate against the U.S. dollar it may also positively affect gold and silver prices. Currently, the Euro/USD is traded sharply up.

The S&P500 index slightly declined Friday by 0.49% to 1,289.09. Other leading indexes also fell including the Dow and NASADQ.  Since the S&P500 index is strongly and positively correlated to gold price and silver price (see the chart below), if the stock market will continue to rise, this might also indicate that gold and silver prices are likely rise. 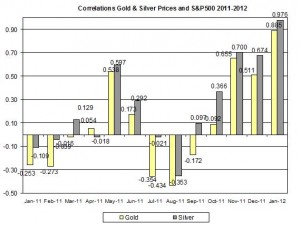 The major precious metals prices are currently traded sharply up in the European markets:

Gold and silver prices declined on Friday, but during most of the month they have had an upward trend. The slow growth in China during the fourth quarter doesn’t seem to hold back commodities traders as major commodities prices keep on rising. The recent news of S&P’s downgrade of Euro Zone EFSF rescue fund on Monday also doesn’t seem to adversely affect the rally in the financial markets. For the time being it seems that the French debt auction is going well and helps keep the Euro strong. If the Euro and AUD will continue to rise against the U.S. dollar and the other financial markets including American stock markets will continue to rise, this may indicate that the recent upward trend of gold price and silver price will continue during the day.