Gold and silver prices changed direction and after they had risen for two consecutive days, they have moderately decreased in yesterday’s trading. Other commodities also traded down including crude oil (WTI). Yesterday the U.S. initial jobless claims sharply fell by 50k. Currently, gold and silver are traded down. Today, the U.S. existing home sales report will be published, and Canada’s core consumer price index.

Here is a market outlook of precious metals prices for today, January 20th: 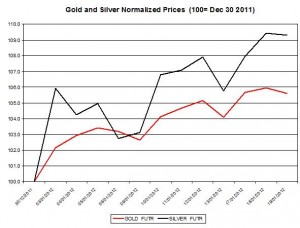 The ratio between gold and silver prices slightly slipped on Thursday, January 19th and reached 54.23. During January the ratio fell by 3.4% as silver price has slightly outperformed gold price. 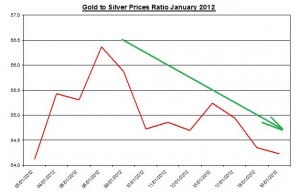 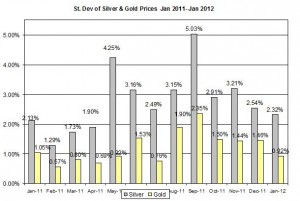 Yesterday, the Philly Fed Manufacturing Index regarding January was published: the survey suggests the U.S. manufacturing conditions further expanded at a slightly faster pace; the January Philly Fed index rose from +6.8 in December to +7.3 in January. This news may have helped push up the American stock markets in yesterday’s trading.

The U.S inflation for December flat and the US inflation, in annual terms, rose by 3.0%. The consumer price index without food and energy slightly rose by 0.1% during December and 2.2% in the past 12 months.

According to a recent report, privately owned Housing starts fell in by 4.1%; nevertheless, the annual rate for December 2011 was 24.9% above the December 2010.

As I have sited in the pasts, there is a supposed lagged (by one day) and negative relation between the development in housing starts and gold price; i.e. as Housing starts annual rates falls, gold price tends to increase the following day. If this relation will hold up then we should expect gold price to rally today.

Canada’s Core CPI: in the recent Canadian CPI report regarding November, the CPI rose by 2.9% during the past 12 month; the core CPI excluding food and energy increased by 2.1%. This news might affect the Canadian dollar currency trading.

U.S. Existing Home Sales: following yesterday’s housing starts report, the upcoming report on existing home sales will also offer an indication to the progress of the real estate market in the in U.S.; in the previous report regarding November the number of homes sold rose(see here the recent review);

The Euro to U.S Dollar rose again for the third straight day, yesterday by 0.82% to reach 1.2863; currently it seems that the debt auctions of France and Spain went well, as they have sold their bonds at a lower yields than anticipated. Therefore, if the Euro and other leading currencies such as Canadian dollar will further appreciate against the U.S. dollar it may help rally gold and silver prices. Currently, the Euro/USD is traded slightly down.

The S&P500 index slightly rose Thursday by 0.49% to 1,314.50 – the highest level since July 26th, 2011. Other leading indexes also increased yesterday including the Dow and NASADQ.  Since the S&P500 index is strongly and positively correlated to gold price and silver price, if the stock market will continue to rally, this might also indicate gold and silver prices will follow. The chart below shows the development of the linear correlation between precious metals prices and S&P500 index during 2011-2012. 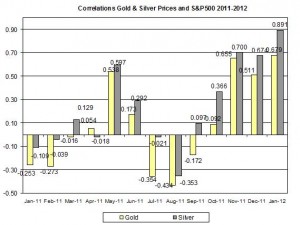 The major precious metals prices are currently traded down in the European markets: