Gold and silver prices changed direction again sharply rose on the last day of the week. The disappointing U.S labor report that came out on Friday rekindled the speculation of the next move of the Fed (i.e. another stimulus plan) that could help rally precious metals.  Currently gold and silver are trading slightly down. On today’s agenda: U.S factory orders report.

Here is a short outlook for gold and silver for Monday, June 4th:

The chart below shows the normalized rates of these metals during the past couple of weeks (normalized to 100 as of May 15th). The chart shows that gold price rose to its highest level in over two weeks. 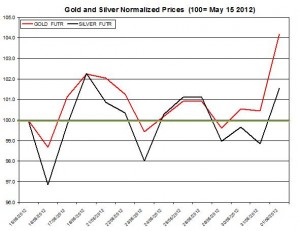 The ratio between the two metals increased on Friday to 56.89. During the week the ratio increased by 2.78% as silver has moderately under-performed gold during the month. 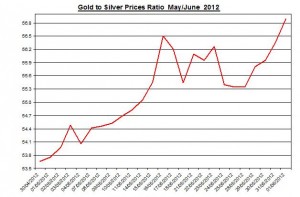 U.S. Employment Expanded by only 69k in May

According to the recent report, the number of non-farm employees increased by only 69,000. The main sectors that expanded during May were in transportation and warehousing, wholesale trade and health care but declined in construction. The rate of unemployment remained virtually unchanged at 8.2%.

As I have already reviewed in the past, historically, as the non-farm payrolls didn’t meet expectations gold tended to rise; this correlation was mostly due to the effect this news has had on the USD; furthermore in recent months a low growth in employment was interpreted by bullion traders as raising the chances of the Federal Reserve intervening in the markets by issuing another stimulus plan (QE3). In the past, QE1 & QE2 may have contributed to the rally in bullion. I have showed in the past the positive relation between U.S money base and precious metals.

The table below shows the correlation between the news of the U.S. non-farm payroll employment changes and the daily changes in bullion rates on the day of the U.S. labor report publication. 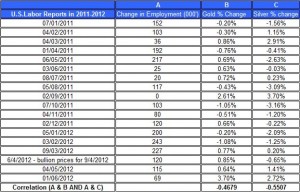 U.S Factory Orders: this report will offer some insight to the growth of the U.S economy and could affect the direction of USD and consequently bullion rates ;

Current Gold and Silver Prices as of June 4th

Bullion prices sharply rose on Friday. Following such a sharp turn the market might start off the week slow especially if there won’t be major developments in the U.S or Europe. The speculation around the next move of the Fed could be reignited when Bernanke will testify later this week in the Senate. Keep in mind that it could just be another storm in a tea cup. But for now the recent rally in bullion could continue unless the turmoil in Europe will pressure down the Euro and in turn adversely affect bullion rates.