Gold and silver prices started off the week falling after they had risen on Friday. The decline in China’s manufacturing PMI index and the tumble of U.S manufacturing PMI to its lowest level since 2009 may have contributed to the decline in commodities rates. There are reports of renewed speculations around a potential stimulus plan to be issued by the Fed that could pull up again bullion rates. The recent news of the IMF lowering the U.S GDP growth rate to 2% in 2012 may also contribute to this sentiment. But I still think there is little evidence to support that the Fed will announce QE3 in the upcoming FOMC meeting at the end of the month. I suspect the potential low volume of trade  as we are one day away from U.S holiday could be responsible for high swings in prices.

Here is a short outlook for gold and silver for Tuesday, July 3rd:

The chart below shows the normalized rates of these precious metals during the past few weeks (normalized to 100 as of June 20th). 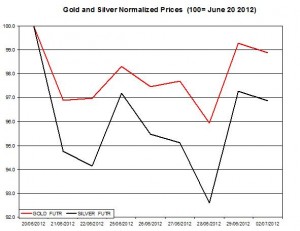 The ratio between the two metals remained unchanged on Monday at 58.1. During June the ratio rose by 3.1% as gold has slightly out-performed silver. 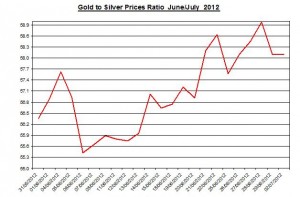 Reserve Bank of Australia – Cash Rate Statement: last month Australia’s Reserve Bank reduced the interest rate by 0.25 percent points to 3.5% – the lowest level since the end of 2009. This was the second rate change this year; if the RBA will decide to lower the rate again this news may affect the Aussie dollar that is strongly linked with commodities prices;

U.S Factory Orders: this report will offer some insight to the growth of the U.S economy and could affect the path of the U.S dollar;

The Euro/US Dollar changed direction and fell on Monday by 0.71% to 1.2576. During last month (UTD) the Euro/U.S Dollar increased by 2.43%. Alternatively, other exchange rates including the Aussie dollar appreciated on Monday against the USD by 0.54%. If the Euro/USD will change direction and trade up, it could pull up along with it bullion rates. Currently the Euro is edging up against the USD.

Current Gold and Silver Rates as of July 3rd

Gold and silver started off the week with little movement as both precious metals edged down. This fall might have been on account of the disapproving manufacturing PMI of China and U.S. Today there aren’t too many news items on the agenda so that I suspect bullion rates may land on the same side as the Euro and Aussie dollar. Since we are nearing the U.S holidays there could be light trading that could result in high swings in the commodities markets. The upcoming U.S report regarding manufacturing orders and the Australian cash rate statement could affect the USD and Aussie dollar, respectively. If these reports will present sharp changes they could also affect commodities rates.

← Commodities and Euro/USD Fell on Monday–Recap July 2nd
Will BP make a comeback in 2012? →