Gold and silver didn’t do much on the last day of July as both precious metals edged down. Many other commodities rates such as oil prices and U.S stock markets also declined. Today, the FOMC will conclude a two day meeting; the FOMC will publish a statement that could affect the forex and commodities markets. The Euro changed direction and rose yesterday. U.S Consumer Confidence changed direction and rose in the previous month, but this news didn’t help rally the markets. China’s manufacturing PMI inched down to 50.1 in July (it was 50.2 in June). This news might adversely affect commodities rates during the day. Currently gold and silver are increasing. On today’s agenda: FOMC Meeting, U.S. ISM Manufacturing, GB Manufacturing PMI, ADP estimate of U.S. non-farm payroll, Spanish Flash Manufacturing PMI, Australian Trade Balance.

Here is a short outlook for precious metals for Wednesday, August 1st:

As seen, the chart shows the normalized prices of precious metals July (normalized to 100 as of June 29th). As you can see, during the month gold and silver didn’t move much. 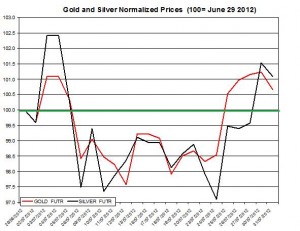 The ratio between the two precious metals declined again on Tuesday to 57.84. During last month the ratio edged down by 0.44% as gold slightly under-performed silver. 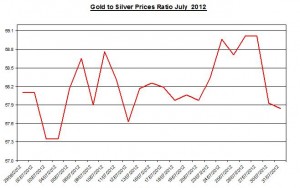 Statement of the FOMC Meeting: Following the testimonies of Bernanke at the Hill and the minutes of last month’s FOMC meeting, it seems as if there won’t be any substantial changes in the upcoming FOMC meeting. On the other hand, the recent appreciation of the USD, the low growth rate in employment and GDP for Q2 are probably pulling the odds up of another QE in the horizon. I think the FOMC won’t announce today of another stimulus plan. I speculate if there won’t any announcement of QE3 or any hints of the Fed moving toward this direction in the near future, gold and silver prices are likely to fall;

Below is a table of the changes in bullion rates during the day of release of the statement  and the following day; it shows that in the last two out of three statements bullion rates tumbled down the next day.

U.S. ISM Manufacturing PMI: During June 2012 the index tumbled down to 49.7%, which means the manufacturing is contracting; this index might affect forex, and bullion markets;

Spanish Flash Manufacturing PMI: According the previous report the index fell to 41.1%, which means the manufacturing is contracting at a faster pace;

GB Manufacturing PMI: for June 2012 the index rose to 48.6%. This rate means the manufacturing sector is contracting at a slower pace; this index might affect GB Pound;

Australian Trade Balance: In the recent report, the seasonally adjusted balance of goods and services expanded from a deficit of $26 million in April 2012 to a $285 million deficit in May 2012. The export of non-monetary gold rose by $185 million (15%); if the gold exports will continue to rise June, it might suggest an increase in demand for non-monetary gold (see here last report);

The Euro/US Dollar changed direction on Tuesday and rose by 0.36% to 1.2304. During the month (UTD) the Euro/USD decreased by 2.86%. Alternatively, other currencies including AUD and CAD nearly didn’t move on Tuesday against the USD as the AUD remained flat and CAD edged down by 0.14%. The correlations between gold and the above-mentioned rates remain robust: during the month, the correlation between the gold and EURO/USD reached 0.64 (daily percent changes); the correlation between gold and AUD /USD, 0.54.  Thus, if the Euro and AUD will declined, they may also pull down precious metals rates. Currently, the Euro/USD is increasing.

Current Gold and Silver Rates as of August 1st

Gold and silver changed direction and after they had increased on Monday, precious metals declined on Tuesday along with the rest of the commodities and stock markets. The FOMC meeting will conclude today; until the release of the statement there could be renewed speculation over the FOMC decision which could pressure bullion rates up.  Eventually, I think the Fed won’t announce of any change in the monetary policy, which will result in the fall of commodities rates. The volatility might remain low until after the FOMC meeting. .The Chinese PMI index declined and could also pressure down commodities rates.

Finally, the upcoming American, British and Spanish manufacturing PMI could affect not only the forex markets but also bullion rates. If the Euro and other “risk currencies” will trade down then they could also pull down precious metals.

← On the Relation between QE Programs and Gold Price
Oil and Petroleum Stockpiles Declined by 7.2 MB– August 1 →