Gold and silver prices bounced back on Friday following the sharp falls recorded on Thursday, but now the tables have turned again as the precious metals prices are declining. The agreement reached on Friday in the recent EU Summit doesn’t seem impress the financial community as major forex and commodities are traded down. Today, the Australian Trade Balance report will be published, the German Wholesales Prices, the U.S. Federal Budget Balance report and BOE Governor King will give a speech. Currently gold and silver are traded sharply down.

Here is a market outlook of precious metals prices for today, December 12th: 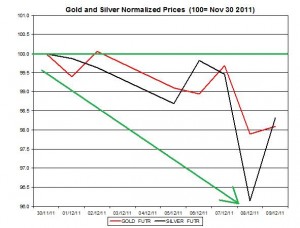 The ratio between gold and silver prices slightly slipped on Friday, December 9th to 53.23. During the month the ratio slightly declined by 0.2% as silver price slightly outperformed gold price. 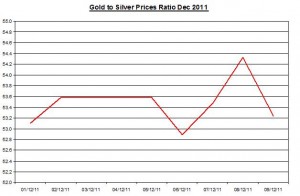 Over the weekend the EU summit was held and the EU countries reached some progress as 23 countries including Germany and France out of the 27 EU countries agreed to strengthen the tighten the fiscal discipline among countries .

This summit didn’t present a new plan or reached a total consensus and lacked the funding needed for this plan and resolutions on how to break free from the current economic slowdown.

This EU summit doesn’t seem to be accepted in the financial markets as the Euro is traded down and gold and silver prices are also falling.

Australian Trade Balance: In the previous report, the seasonally adjusted balance of goods and services declined to $2,564 million in September. There was also a decrease in export of non-monetary gold by $411 million (24%); if the gold exports will continue to decline in October, it might suggest a decrease in demand for non-monetary gold that could explain the development in gold price (see here last report);

U.S. Federal Budget Balance: this report indicates the government debt growth and thus may affect the USD. In the November report regarding October the deficit rose by $9 billion to a deficit of $1,295 billion for the fiscal year of 2011 (See here a summary of the recent report).

The Euro to U.S Dollar slightly rose on Friday by 0.34% to reach 1.3386. Other forex exchange rates such as the Australian dollar and Canadian dollar also appreciated against the US dollar; currently however Euro is traded down. The current decline is probably among the reasons for the currently sharp falls of gold and silver prices. If the Euro and AUD will continue to decline today they may drag down gold and silver prices as well.

The major precious metals are currently traded sharply down in the European markets: