Gold and silver prices sharply inclined yesterday, after they had sharply declined during most of the past few days. Currently, gold and silver prices are falling. The good news from U.S. on the gains in the housing starts and the expectation that ECB will issue additional loans to EU banks helped rally the commodities prices. Today, the U.S. Existing Home Sales report will be published and the Core Retails Sales of Canada.

Here is a market outlook of precious metals prices for today, December 21st: 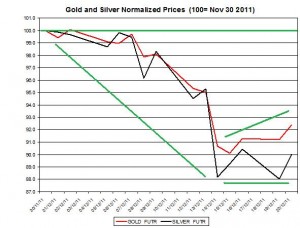 The ratio between gold and silver prices slightly declined on Tuesday, December 20th and reached 54.77. During the month the ratio gained 2.6% as gold price has outperformed silver price. 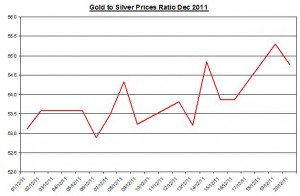 According to a recent article by Bloomberg, the European Central Bank is planning to issue three year loans at a very low cost to struggling EU banks; analysts estimate the loans to be between €150 billion and €600 billion. This news may will help rally the Euro and consequently positively affect gold and silver prices.

According to the recent release of the new residential construction statistics for November there was a sharp gain in building permits and housing starts.

Privately owned Housing starts sharply rose during November by 9.3% increase; furthermore, the annual rate for November 2011 was 24.3% above the rate in November 2010.

This news provides a clear positive signal about the progress of the U.S real estate market and may have helped rally the Stock and commodities markets during yesterday’s trading (see here the complete review).

Core Retails Sales Canada (October 2011): This report presents the changes in the retails sales in Canada during October. It may influence the USD/CAD exchange rate. In the previous report regarding September, retails sales slightly inclined by 1.0% to $38.2 billion;

U.S. Existing Home Sales: This report will demonstrate the development in U.S. existing home sales during November; in the previous report regarding October the number of homes sold rose; this report may affect the stock and forex markets and indirectly the prices of major commodities including gold an silver prices (see here the recent review);

The Euro to U.S Dollar changed direction and rallied on Tuesday by 0.65% to reach 1.3083. Other forex exchange rates such as the Yen and Australian dollar also appreciated against the U.S dollar. If these currencies will continue to appreciate against the U.S. dollar, then it may affect gold and silver prices to further rally.

The S&P500 index sharply inclined on Tuesday by 2.98% to 1,241.30. Due to yesterday’s rally, most of the losses of S&P500 index during December were erased as it declined by only 0.45% during the month. The S&P500 index continue to be strongly and positively correlated to gold and silver prices (during December the linear correlation was 0.606 and 0.713, respectively), so that if the stock market will continue to rally, it may also indicate that gold and silver prices are likely to follow and incline.

The graph below shows the development of the linear correlation of precious metals prices and S&P500 index during recent months. 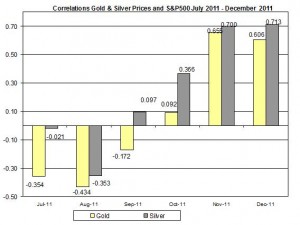 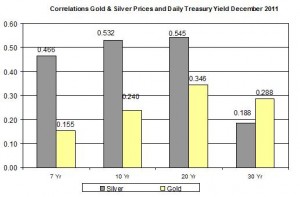 The major precious metals are currently traded down in the U.S. markets:

Gold and silver prices sharply inclined yesterday, as they have started to recover from the sharp declines of last week. The rally in other commodities prices, Forex markets (such as Euro and AUD) and Major American Stock indexes serves to indicate that the gains in precious metals prices were part of widespread recovery. The goods news from Europe of ECB stepping up and issuing additional loans to EU struggling banks helped recuperate the market sentiment and ease some of the speculation on the stability of the EU. The improvement in the U.S. housing starts may have also helped rally the stock and forex markets and thus indirectly help push up gold and silver prices. If the good news from Europe will continue and the U.S homes sales will also show improvement this may help keep gold and silver prices rising.