Gold and silver prices changed direction and moderately declined yesterday, even though other commodities prices such as crude oil prices rose on Wednesday. Currently, gold and silver prices are slightly rising. Today, the U.S. final Q3 GDP will be published, GB’s GDP of third quarter and U.S. Unemployment Claims.

Here is a market outlook of precious metals prices for today, December 22nd: 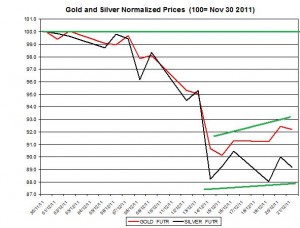 The ratio between gold and silver prices slightly declined on Wednesday, December 21st and reached 55.17. During the month the ratio gained 3.4% as gold price has outperformed silver price. 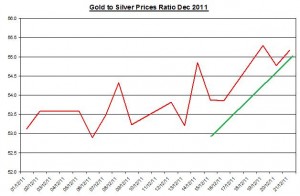 The correlation between gold price and silver price is still high in December as it was in previous months. 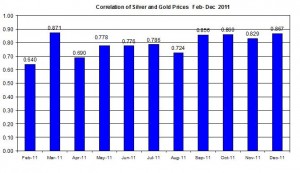 The U.S existing homes sales slightly rose in November by 4%; this news coincides with the recent sharp gains in the housing starts, which was announced yesterday.

Great Britain Updated GDP 3Q 2011: This will be the final projection of the third quarter real GDP of GB. In the previous estimate of the GDP for the 3Q2011 grew by 0.5%; if the final rate will change, it may affect the GBP/USD exchange rate;

Final U.S GDP 3Q 2011 Report: This will also be the final estimate of U.S. GDP growth rate in the third quarter. In the preliminary estimates the 3Q2011 GDP growth rate was 2.0%, compared with 1.3% increase at 2Q2011. This shows a slightly higher growth rate for the US’s GDP even though the recent Q3 growth rate estimate was revised down; another revision may also affect forex and commodities traders (for the second estimate of 3Q GDP).

U.S. Unemployment Claims: initial claims decreased by 19,000 to 366,000 claims for the week ending on December 10th; the number of insured unemployment slightly inclined by 4k to 3.603  million during the week of December 3rd.

The Euro to U.S Dollar changed direction again and slipped on Wednesday by 0.28% to reach 1.3047. On the other hand, other forex exchange rates such as the Canadian dollar and Australian dollar slightly appreciated against the U.S dollar. If major currencies will appreciate against the U.S. dollar, it may also affect gold and silver prices to bounce back. 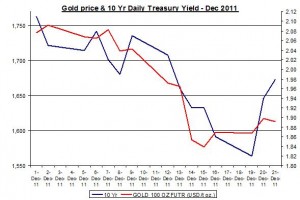 The major precious metals are currently traded slightly up in the European markets:

Gold and silver prices continue to zigzag and changed direction again as they both moderately declined yesterday. The rally in other commodities prices mainly crude oil prices and Forex markets (such as CAD and AUD) and most American Stock indexes (including S&P500) didn’t coincided with yesterday’s falls of precious metals prices. The upcoming news from Europe and U.S. in regards to the final GDP might stir up the markets if there will be substantial changes; otherwise if the rest of the commodities will continue to trade up, U.S. LT treasuries yields will rise,   and major currencies will also continue to appreciate against the U.S. dollar, gold and silver prices are likely to follow and bounce back.