The download for free this month’s report on gold and silver sign up to Trading NRG’s newsletter:

The chart below presents the changes in gold and silver prices during November, in which the prices were normalized to 100 on October 31st 2011. 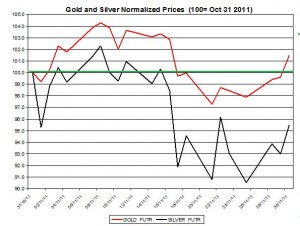 The next chart shows the development of the ratio of gold price to silver price (gold price/silver price) during November; the ratio had an upward trend during most of the month. The ratio rose as silver price underperformed gold price. In the last week of November the ratio stabilized around the 53-54 mark. 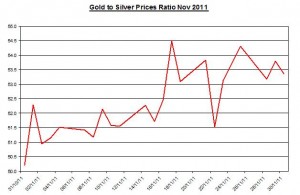