Gold and silver prices didn’t move much during yesterday’s trading. The U.S. reports that were published yesterday including Philly Fed survey, U.S. unemployment claims, housing starts and U.S. PPI indicated the U.S economy has slightly improved during January.  This improvement may have helped rally the U.S. stock market during yesterday’s trading, but didn’t seem to affect precious metals prices. Currently gold and silver prices are rising. Today, the American and Canadian CPI will come out.

Here is a short review of the financial news and events related to metals, and an outlook for metals prices for Friday, February 17th:

The chart below demonstrates the changes of gold and silver during the month (prices are normalized to January 31st). 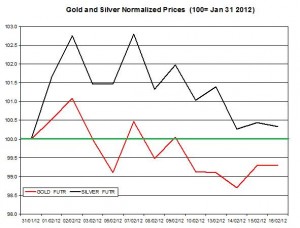 The ratio between gold and silver moderately rose on Thursday, February 16th at 51.80. During February the ratio slightly declined by 1.01% as silver has moderately outperformed gold. In the chart below you can see the development of this ratio during February. 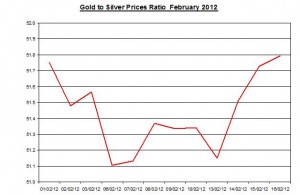 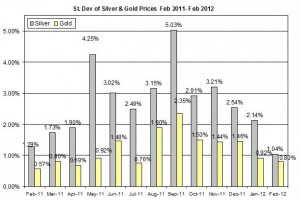 Canada’s Core CPI: In December, the CPI rose by 2.3% during the past 12 month up to December – this is a lower rate than in November by 0.6 percent points; the core CPI excluding food and energy rose by 1.9% from December 2010 to December 2011. This report could affect the trade on the Canadian dollar, which is strongly correlated with gold and silver prices.

The Euro/U.S Dollar slightly rose during Thursday’s trading by 0.49% to 1.3130. During February Euro/U.S Dollar increased by 0.36%; yesterday, the Australian dollar also appreciated against the U.S. dollar by 0.54%. The correlation between Aussie dollar and precious metals is still strong and robust (see below the moving linear correlation between AUD and gold price in the past several months). If the Euro and Australian dollar will trade up today, it could indicate that gold and silver will follow and also increase. Currently, the Euro/USD and AUD/USD are rising. 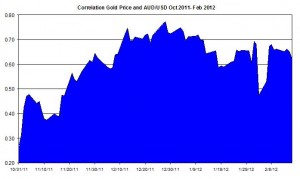 Gold and silver prices changed direction several times during yesterday’s trading, but eventfully they have ended only slightly different from Wednesday price levels. These moderate changes represent gold and silver prices‘ movement in the past several months.  This might indicate that precious metals traders are waiting for new developments from Europe and U.S to reignite the metals market. The upcoming reports to be published today regarding the U.S. and Canadian consumer price indexes might slightly affect the direction of U.S dollar and Canadian dollar and consequently may also affect gold and silver prices.