The FOMC decision to purchase $400 billion LT securities is likely to continue affecting in small doses the financial markets throughout June 2012 when the program will end.  But currently the financial markets don’t seem to be pleased with this plan as the US stock markets sharply fell yesterday. Gold and silver prices didn’t seem to react to this news yesterday, but currently they are traded sharply down. 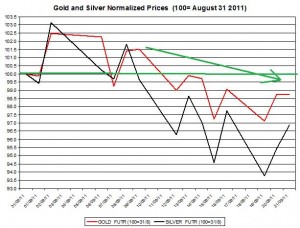 The ratio between gold and silver prices reached on Wednesday, September 21st 44.68. During September, gold price has slightly outperformed silver price as the ratio rose by 1.9%. 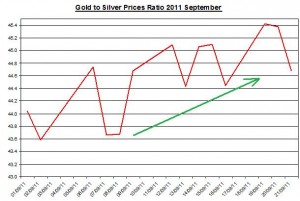 The Federal Open Market Committee decided to purchase $400 billionworth of Long Term Securities in exchange of Short Term Securities to be completed the end of June 2012. This isn’t a QE3 because there is no expansion of the Fed’s balance. The committee took this decision in a 7-3 vote for it. This action should further decrease the long term securities’ yields and help the US government rollover its debt.  The financial markets didn’t react well to this news as the markets may have considered a more substantial involvement by the Fed and not a relatively small and modest purchase plan.

This news isn’t something earth-shattering, but isn’t a quantitative easing plan that will weaken the US dollar. Therefore, this news isn’t likely to strengthen, via the USD, gold and silver.

Euro Area Manufacturing PMI: In the last report regarding August 2011, the Euro Zone ManufacturingPMI dropped below the 50 point mark. If this report will continue to be negative, it may further pressure the Euro/USD exchange rate to decline in consequently also gold and silver prices;

Rise in US Existing Home Sales in August

According to the recent report of the Realtors’ organization the U.S. existing home sales rate rose in August 2011 by 7.7% to a seasonally adjusted annual rate of 5.03 million home sales.

The Euro to USD conversion rate along with other exchange rates such as AUD/USD sharply declined yesterday; the EURO/USD declined by 0.94% to 1.3573; during September the EURO/USD rate fell by 5.5%. The recent news of the Fed’s decision might strengthen the USD. If the USD will continue to appreciate against major currencies such as the Euro, AUD and CAD, as it did throughout most of September, it further pressure gold and silver prices to trade down.

The precious metals prices are currently traded sharply down in the European markets:

The current ratio of gold to silver prices is at 46.22.

For the remainder of the month I speculate that gold and silver prices will slowly recover from their current decline, but will probably finish the month below their initial price levels from the beginning of the month.