Gold and silver prices shifted to red again yesterday after they had regained some value a day earlier. Currently, gold and silver prices are traded up. The German Parliament approved the expansion of the European bailout fund that could ease the uncertainty in the financial markets over the stability of the Euro Area.  Today, the U.S. Unemployment Claims report will be published, U.S. pending Home Sales and US GDP 2Q 2011 Estimate.

Here is a market outlook of precious metals prices for today, September 29th: 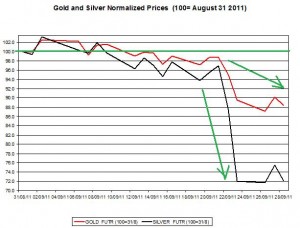 The ratio between gold and silver prices slightly inclined on Wednesday, September 28th to 53.70. During September, silver price declined by a much higher rate than gold price as the ratio increased by 22.5%. 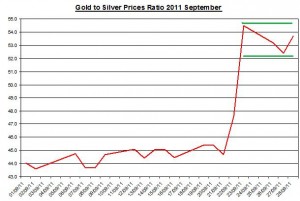 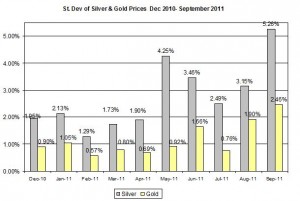 Germany voted today and approved on a bailout plan for Greece that includes raising the German guarantees for the EFSF fund from €123 billion to €211 billion;

U.S. Pending Home Sales: This report will be another indicator for the economic progress in the U.S. housing market in the U.S. and could affect traders not only in the stock market, but also in commodities markets;

The EURO/USD exchange rate along with other exchange rates changed direction and fell yesterday: the Euro to USD fell by 0.31% to reach 1.3543; the AUD/USD shed 1.34% to its value; the USD/CAD increased by 1.39%. The drop of major currencies against the USD might be related to the ongoing concerns over the affects of a Greek default.

The US 10-year Treasury yield inclined again by 0.03 percent points to 2.03% – the highest rate since September 20th; during September it has fallen by 0.20 percent points. The rise in LT securities’ yields in recent days represents a shift in the direction of yields in recent months. The negative correlation between the US long term Treasury yields and gold price daily percent changes (in September the correlation was -0.217), mainly in recent days suggest that traders are moving away from the shopping spree of safe haven investments as traders did in August.  If this trend will continue, it may keep gold price low in the near future. 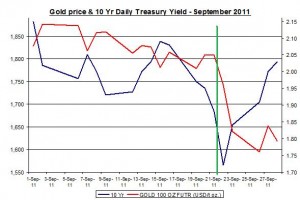 The current ratio of gold to silver prices is at 52.27.

Gold and silver prices changed direction again and sharply fell yesterday. The recent trend in the financial markets seems that traders are pushing away from the safe haven investments including the US treasuries bills and precious metals. On the other hand the stock markets are also not performing well. This situation might suggest that the market is still in a level of high uncertainty especially in regards to the next steps of the policymakers in Europe and the economic progress of the US. Today’s US home report may have some effect on trading. In the meantime, gold and silver prices are likely to continue zigzagging and perhaps slightly rising in the next couple of days of the month.