Yesterday, the U.S markets were closed due to President’s Day so there weren’t any updates on gold and silver prices. Earlier today, The EU ministers of finance approved the €130 billion bailout package for Greece. The Euro ended up yesterday in the green as many had anticipated this news. Currently gold and silver prices are sharply rising. Today, China flash Manufacturing PMI report will come out along with Canada’s Retails Sales and Great Britain Net borrowing. Bloomberg reports that India’s imports of gold is falling and may reach 900 metric tons  in 2012, which is a nearly 7% lower than the 969 tons imported in 2011. This drop will be the first one in three years. If this trend will continue it could eventually catch up with the price of gold and pressure it down during the year.

Here is a short review of the financial news and events related to metals, and an outlook for metals prices for Tuesday, February 21st:

The leading Euro Zone ministers of finance approved this morning after many hours of talks and discussions the second bailout plan for Greece and thus prevented Greece from reaching default on its debt in March. The ministers agreed on the measures the Greeks will have to implement in order to cuts its debt to 120.5% of its GDP by 2020. Furthermore, private bondholders agreed to take more losses on the Greek debt. There is still uncertainty whether Greece will maintain the austerity plan –there is an election in April that could chance the circumstance. In the mean time, the Euro is rising, which could mean traders feel some confidence in the recent bailout plan.

The linear correlation between gold and silver is still strong and robust as indicated below. 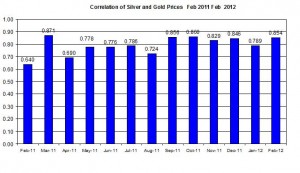 Great Britain Net borrowing: this update will show the monthly changes in the public sector net borrowing for January 2012; as of December 2011, the net borrowing reached £13.7 billion;

Retails Sales Canada: This report might affect the USD/CAD exchange rate, which is strongly correlated with gold and silver prices. In the recent report regarding November, retails sales slightly rose by 0.3;

The Euro/U.S Dollar rose on Monday by 0.78% to 1.3243. During February Euro/U.S Dollar increased by 1.22%; furthermore, the Australian dollar also appreciated against the U.S. dollar by 0.46%. The correlation between Aussie dollar and gold prices is still robust (the linear correlation between Aussie dollar and gold price is 0.63 over the past month, and with silver price it’s 0.64). If the Euro and Australian dollar will continue their upward trend today, it could indicate that gold and silver prices will also rally. Currently, the Euro/USD and AUD/USD are rising. 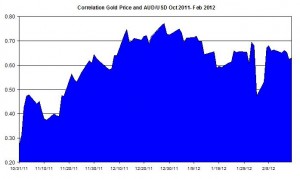 Gold and silver prices didn’t rise or fall during last week but this week this standoff could change: the recent developments regarding the Greek bailout, which was approved by the EU ministers of finance could help lift the Euro and thus drag along with it gold and silver prices. Finally, the upcoming reports to be published today especially regarding China might influence bullion traders.