Gold and silver prices started off the second week of February with little changes. The financial community is waiting in anticipation for the results of the Greek negotiations; these negotiations might affect the direction of the Euro and consequently may also influence precious metals prices. But up to now, the negotiations didn’t influence the forex markets. Currently gold and silver prices are rising. Today, Chairman Bernanke will testify in the Senate and the German Industrial Production report will come out.

Here is a report of major news and events, and an analysis of metals prices for Tuesday, February 7th:

The chart below presents the development of prices of gold and silver during the past couple of weeks (metals are normalized to 100= January 24th). 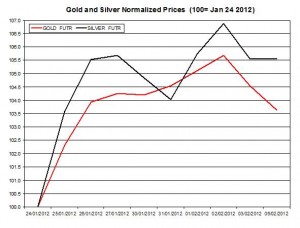 The ratio between gold and silver slightly fell on Monday, February 6th and reached 51.11. During February the ratio fell by 2.32% as silver has very slightly outperformed gold. In the chart below is the development of this ratio during January and February. 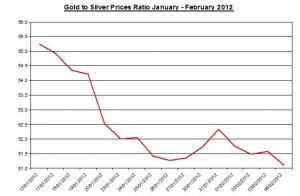 Bernanke Testifies in the Senate: following the recent FOMC meeting to extend the pledge of low rates until the end of 2014, the upcoming testimony will be before the U.S. Senate and will refer to the economic outlook of the U.S. and the Fed’s situation. This testimony might offer some insight to the future steps on the Fed and whether another QE program is on the table; if Bernanke will even hint of another QE program (I guess he won’t), if could sharply pressure up gold and silver prices;

German Industrial Production: this report will present the growth during December of Germany’s industrial production and consequently may affect the trading of the Euro and bullion;

The U.S. 10-year Treasury yield fell on Monday by 0.04 percent points to 1.93%; during February the 10 year treasury yield rose by 0.10 percent point. The recent rise in LT securities yields may indicate that the risk appetite in the markets was augmented. During recent weeks the relation between if the LT U.S. treasury yield and precious metals seems to have changed direction from a positive relation to a negative one. The chart below shows the development of the U.S. 10 yr yield and gold price during January and February. The changes in U.S. treasury market might indicate how the metals market will develop. 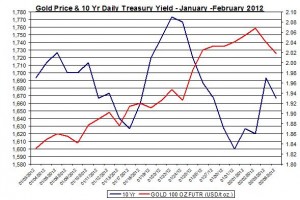 The Euro/U.S Dollar only slightly fell on Monday by 0.21% to 1.3130; the headlines of the negotiations over the Greek debt didn’t seem to affect much the trading of the Euro. During February Euro/U.S Dollar rose by 0.40%; other leading exchange rates such as Canadian dollar and Australian dollar also depreciated against the U.S. dollar. If the Euro and other “risk currencies” will continue to trade down against the U.S Dollar it could indicate that precious metals will also trade down. Currently, the Euro/USD is moderately declining.

Gold and silver prices started off the week with slight changes after they have had sharp gain during most of January; the bullish sentiment vis-à-vis the commodities market has seem to change but the rally has slowed down. The upcoming testimony of Bernanke might influence bullion traders especially if he will hint of another QE program. But I guess he won’t do so.  In such a case, the forex market will probably affect the direction of gold and silver prices during the day so that if the Euro and AUD will continue to depreciate, this might also pull down precious metals prices.

Here is a reminder of the top events and reports that are planed for today(all times GMT):

← Gold and Oil Prices Started the Week Declining –Recap February 6
Can We Predict Future Gold Price via the U.S. Money Base? →