Gold and silver prices ended January with very moderate changes as silver slightly declined and gold rose.  The Euro and AUD also didn’t do much yesterday as the market still awaits for headlines from the Greek debt negotiations. Today, Portugal will sell short term bonds. These events might affect the direction of the precious metals prices via the forex markets. Currently gold and silver are rising. Today, the U.S. ISM Manufacturing PMI will be published; other publications include: U.S. non-farm payroll ADP estimate; Australian Trade Balance report.

Here is a report of major news and events, and an analysis of metals prices for Wednesday, February 1st:

The chart below presents the changes of prices of gold and silver during the past couple of weeks (the metals are normalized to 100= January 13th). 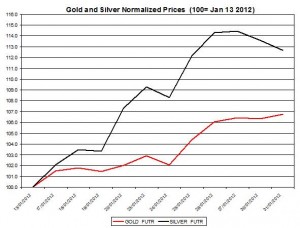 The ratio between gold and silver slightly increased on Wednesday, January 31st and reached 52.32. During January the ratio declined by 6.78% as silver has slightly outperformed gold. 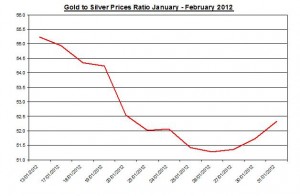 U.S. ISM Manufacturing PMI: This report will refer to the manufacturing sector for January. In December, the index increased by 1.2 points to 53.9%; this index might affect the forex market (see here my review of last report);

Australian Trade Balance: The upcoming report will refer to the changes in December. In November, the export of non-monetary gold sharply increased by $358 million (32%); if the gold exports will continue to rise in December, it might suggest a rise in demand for non-monetary gold that could explain the recent rally in gold (see here last report);

The Euro/U.S Dollar slightly fell on Tuesday by 0.46% to reach 1.3083 – this was the second consecutive day the Euro traded down; today’s progress in the Greek debt negotiations and the Portuguese debt sales might influence the direction of the Euro; if the Euro will rally from its recent tumble against the U.S Dollar it could indicate that precious metals prices will continue their upward trend. Currently, the Euro/USD is trading slightly up.

Gold and silver prices ended January with very little changes despite their sharp rally throughout most of the month. On the first day of February this rally might continue if there won’t be a substantial shift in the fundamentals (e.g. the upcoming news and reports won’t show shocking changes). Nevertheless, I speculate, the bullish sentiment will start to subside, especially after the FOMC’s decision to keep rates low, which was among the key factors pressuring gold and silver up in late January, was already incorporated into the precious metals prices.