The market has changed direction again as major commodities and currencies rallied from Monday’s falls. Gold and silver prices started off the day falling but soon after they had changed direction and finished the day in the green. The positive news coming from Greece of a possible agreement on a bailout package might have helped rally precious metals prices and the Euro. From the other side of the globe, Chairman of the Federal Reserve stated in his testimony the challenges the U.S. economy is facing including cutting the budget deficit and reaching full employment. These news items may have helped pushing up gold and silver up. Currently gold and silver prices have changed direction and are falling. Today, China’s consumer price index will come out.

Here is a report of major news and events, and an analysis of metals prices for Wednesday, February 8th:

The chart below shows the development of gold and silver during the past few weeks (metals prices are normalized to 100= January 24th). 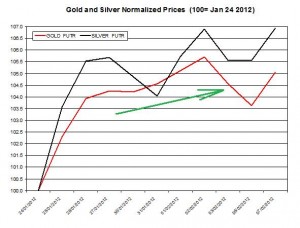 The ratio between gold and silver slightly rose on Tuesday, February 7th and reached 51.13. During February the ratio fell by 2.28% as silver has very slightly outperformed gold. In the chart below is the development of this ratio during recent months. 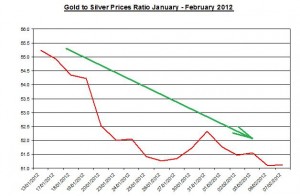 Following the recent FOMC decision  to keep low rates until the end of 2014, the recent testimony of Bernanke before the U.S. Senate referred to the economic outlook of the U.S. Bernanke didn’t hint of another QE program, but he did point out to the challenges the U.S. economy will face in the years to come including bringing long term unemployed back to the workforce, and cutting the budget deficit. This testimony may have pulled down the U.S. dollar.

Chinese CPI: during November, the Chinese inflation rate sharply fell to an annual rate of 4.2%; this rate is coming very close to China’s inflation target of 4% in annual terms. There are speculations of another drop in the CPI. If the rate will fall below 4% it could means the People Bank of China’s will be able to ease some of its restrictions; China is among the leading countries in importing gold and silver;

The Euro/U.S Dollar changed direction and sharply rose on Tuesday by 0.99% to 1.3260. During February Euro/U.S Dollar rose by 1.35%; other leading exchange rates such as Canadian dollar and Australian dollar also strongly appreciated against the U.S. dollar. During 2012 there was a strong linear correlation among the EURO, AUD and CAD and gold and silver prices. If the Euro and other “risk currencies” will continue to trade down it could indicate that metals prices will also decrease. Currently, the Euro/USD is moderately falling. 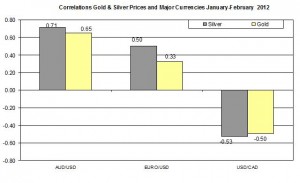