Many explain the connection between the EU debt crisis and changes in gold price via the risk level in the markets: as the risk aversion in the markets rises (which could be stem, in part, from the debt crisis in Greece/ Ireland/ Portugal/ Italy and so forth), traders lean towards safe haven investments such as gold and silver. But in recent months there have been a paradigm shift and I suspect  precious metals prices tend to follow the direction of the Euro.

The chart below shows the development of the Euro/USD and gold price during 2011 (until November): 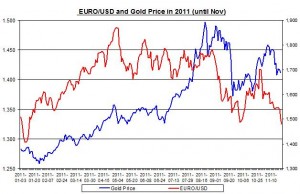 In the chart gold price rose during most of 2011 until August when it changed direction and sharply declined. Most of these falls, mainly in August and September, were stem from the decision of CME to raise the margins on gold and silver.

During those months the Euro also plummeted as the European debt crisis took its toll on the markets and sharply raised the risk aversion sentiment among traders (this turn of events was probably among the reasons the CME raised margins  to cool the sharp gains in gold and silver prices).

Since then, there seems to have been a paradigm shift and as gold and silver became more risky to hold (because of the higher margins), they have also became more affected by the European debt crisis via the Euro, i.e. as the Euro weakened against the US dollar, gold price declined.

The chart below shows the linear correlation of the daily percent changes of gold and silver prices and Euro to US dollar each month until November. 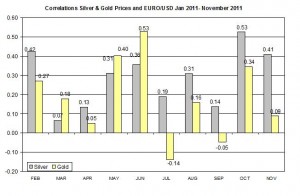 It shows the correlation between precious metals prices and Euro/USD was strong in October but weak in November.

The table below shows the monthly changes for precious metals prices and Euro/USD and AUD/USD in 2011.

According to the table,  sharpest monthly fall of gold price in 2011 was in September when the sharpest falls of the Euro and AUD were also recorded. In October, as the Euro rose so did gold and silver prices. Before September, there were months in which gold price rose but the Euro fell (January, July) and vise versa.

These charts suggest  the sharp decline in the Euro/USD, which was stem from the EU debt concerns, was related with the declines of gold and silver prices.

There were also reports that due to the liquidity problem that many European banks faced, they have sold their gold and reduced their position in commodities. If this is true, then it could also explain why gold price declines as the debt crisis deepens.

This means as the European debt crisis will continue to linger, it might adversely affect the Euro/USD and in turn might also trade down gold and silver.

This is by no means an investment advice only market analysis; please see here full disclaimer.

This is by no means an investment advice only market analysis; please see here full disclaimer.